Few things in this world capture the struggle of life with chronic illness as well as the dynamic of Linus Van Pelt and his blanket. Most days, Linus is just like the rest of the gang – he just happens to need a blanket at all times.

And Linus without his blanket so captures me without medication, or me in a flare, or me without access to a doctor. Sometimes I calmly mope by the dryer like Linus up there, but more often I’m like Linus in the special “A Boy Called Charlie Brown.” See, Charlie Brown is going to represent his school in the regional spelling bee, and Linus gives him his blanket to take as a “good luck” charm.

Of course, Charlie Brown hasn’t been gone long before Linus needs to go and get his blanket back. CLICK HERE to watch starting at 53:47, or check out the embedded video if you want to watch the entire special.

Linus is in a state similar to one I am in when I’m in a flare. Let’s see how his sister, Lucy, reacts. 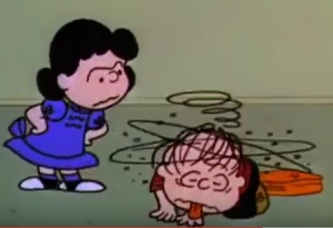 Linus explains his predicament and ends with “now I keep passing out!” Been there, buddy. And Lucy, after much eye-rolling, suggests he step outside for some fresh air. Points for listening and even suggesting something that could be moderately helpful, but it’s pretty obvious she’s more annoyed than concerned. Frankly, I’ve had swirls and dots around my head and had my family act as though I was a child without a security blanket – in other words, someone who is overreacting to a stupid problem.

But still, Linus does try going outside. But it isn’t enough. So he enlists help from Snoopy. He says he needs to find Charlie Brown and get his blanket back! And Snoopy agrees to accompany him. With much eye-rolling but at least he’s kinder than Lucy was. Good on ya, Snoopy. Way to help a friend in need!

Also, this is the most accurate representation of my face on the way to doctor or medicine when panic has set in. Doesn’t matter if I’m in physical pain or having a mental anxiety attack. This is me: 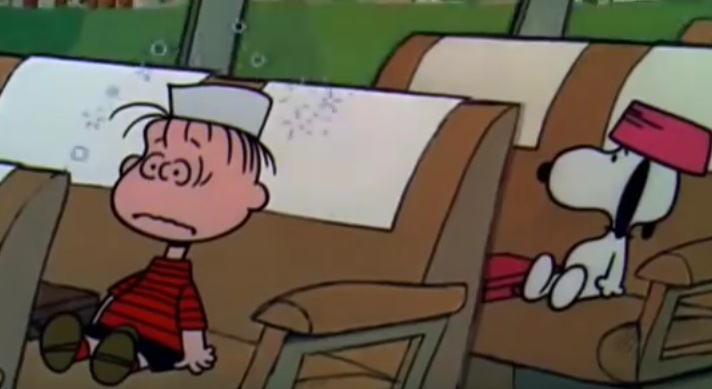 And my healthy friend is just lookin out the window like “Is that a pokestop?” (YES I’M ON POKEMON GO- we can gush about how amazing it is later).

Meanwhile, Charlie Brown isn’t feeling so great either. He’s been studying spelling all night! He even exclaims that this is too much! He needs to put his health first and take a break! Which of course he doesn’t, because the spelling bee is too important (as an apparition of an angry Lucy reminds him). Surely he will be able to relate to Linus and sympathize…

Except no! Because just like every healthy person who thinks they “get” chronic illness, he might think that feeling sick or stressed from overworking himself gives him insight. But it doesn’t. Do you know what the main difference is between chronic illness and acute illness? Watch this– CHARLIE BROWN JUMPS RIGHT UP WHEN HE SEES THEM. When he sees his friends he’s suddenly lit with sprightly enthusiasm! Huzzah for you and all your spoons Charlie Brown!

This scene is actually comedic genius. Snoopy runs to the bathroom to get a glass of water – which he comes back to drink himself while he watches Linus come to and explain that he needs his blanket back. Damnit Snoopy.

And after all this, Charlie Brown really doesn’t know what happened to the blanket. He’s been so busy with his own problems you see. The language here is great. Charlie Brown calmly says “Gee I’m sorry Linus” with almost no emotion while Linus is panting and yelling “FORGOT?!?!??! FORGOT ABOUT MY BLANKET?!?!?” Because it’s his entire freaking world.

Screw you, Charlie Brown. Maybe it’s in the lobby? If not, it’s between here and the library?! I’M LITERALLY DYING. I DON’T HAVE TIME FOR YOUR MAYBES.

Now Linus is getting mad. Because everyone around him is horrible so he has every right to be. “He THINKS it’s at the Library!” yup, he even gets a little Gollumy. Nasty hobbitses… they lost the precious…

Then he snaps. He turns around and yells “CHARLIE BROWN I OUGHTTA KICK YOU.” But then he passes out because flares tend to keep you from fulfilling promises of violence.

Then Charlie Brown makes him leave, noting aging how IMPORTANT it is that he keep studying. Yeah no problem buddy, it’s just MY LIFE. But it’s no SPELLING BEE so I understand! Asshat.

So now Linus has to go walk all over town looking for the light of his life that his “best friend” just “forgot about.” And Snoopy tags along, which probably makes him feel good about himself even though he’s not actually helping AT ALL.

And WTF is this Snoopy? You’re going to wander off and have an ENTIRE FREAKING ICE SKATING MONTAGE while I SLOWLY DIE ALONE? It’s not even just ice skating, it turns into an entire imaginary hockey game. DAMNIT SNOOPY THIS IS IMPORTANT.

And then the blanket isn’t even at the library. All that for nothing! Linus snaps. All hope is lost and Snoopy’s down there making faces at statues, that’s IT. YOU’VE BEEN NO HELP AT ALL, SNOOPY!

But it doesn’t make him feel any better. Snapping at people when you’re suffering rarely does. But it made me, the audience, feel better.

“THE WORLD IS ENDING AND HE CAN’T EVEN HELP FIND A BLANKET.”

I feel you Linus. I feel you.

And after vowing to never forgive Charlie Brown for being a self-absorbed idiot who looses blankets, he returns to find IT WAS IN CHARLIE BROWN’S STUPID ROOM THE WHOLE TIME. AND HE’S USING IT TO SHINE HIS SHOES FOR HIS F%#!$)*@ SPELLING BEE.

But, much like when the cold find warmth or the hangry get fed, once Linus is reunited with his blanket and stabilized, all is forgiven. He even goes on to support Charlie Brown as he faces the spelling bee. 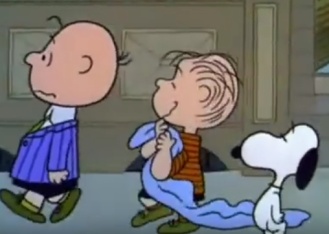 3 thoughts on “Linus Without His Blanket is All Of Us”