When my gastroenterologist diagnosed me with IBS, he said it was anxiety-based and I was put on zoloft. That’s the closest I’ve come to a diagnosis on my mental health. A long time ago I was screened by a psychologist and diagnosed with some temporary teenage form of depression. We stopped going and I never heard much about it in the first place. And here I am, on zoloft (because one does not simply ‘quit’ zoloft) with no real diagnosis or idea if I have a mental illness or if I’m just a little uptight.

Sometimes I read things online about depression, anxiety, OCD, or even autism, and think “hey that sounds like me, weird.”  There are some bizarre things I do all day every day. Why write about them? Well for one thing, I like doing them and people seem to find it interesting. Some people even seem interested in implementing my “systems” or rituals into their life in a much less obsessive/extreme way. Plus I’d like to know– do you do this too?

There are two major “systems” in my life. I’ll start with the smaller one: my clothes system. I started doing this as a child and refined it over time. It began as me organizing my clothes in a particular way. It’s hard to explain, but it has to do with randomization and color. I’d choose something like a book or poster with colors on it and order my clothes according to it… let’s say I was using an image of a rainbow (which I never did because randomization is a big part of this, but for the sake of example):

I’d hang up (or stack folded clothes) like this: A red shirt, then one with orange on it, then yellow, green, blue, dark blue, purple, and then white for the clouds. Then I’d choose another image and keep going (I do this to organize other things too, like movies or our toy displays…). But I had trouble keeping them in order because my mom would put away laundry for me sometimes or I’d forget where I was in the “line” or I’d need to wear something specific one day. Over time I refined my system. I’d put a penny inside the folded shirt I wanted to wear next, stacking newly washed clothes on top to await integration into the “system” until I reached the end of the stack. I also alternated between stacks in the drawers and the hanging clothes. I marked my spot in the closet by simply keeping my extra hangers between the new clothes and the “ordered” clothes. My pants are a separate, more flexible system not organized by anything really, just hung up in whatever order they’re washed and separated by not yet worn and worn once or twice before it’s time to wash them. I even have a very rudimentary organizational system for my underwear?

WHY? I’m sure you’re asking. I don’t actually know. It’s not like there was a day I decided to do this, it happened over time. My mom was bewildered to find pennies sprinkled throughout my drawers and she can’t believe I still do it as an adult in my own house. I remember that my mom encouraged me to lay out my clothes for the next day before I went to bed, and I remember that I hated doing that. It really stressed me out. I guess this is my elaborate response to that stress – now I just get up and put on whatever is next. If it’s inappropriate for the occasion or I need to wear something specific, I don’t mind breaking the system. For just one day I mean.

It has a lot of pros. For one thing, it has a similar effect to this cleaning tip:

When a shirt/dress comes up in the system that I don’t want to wear, I question why that is and usually decide it’s time to let that item go.

Cons? Well…mostly just that it’s a crazy thing that no one does.

But that was the tamer of my two systems.

We’re going down the rabbit hole.

Everything I ever do is governed by a system. I have a list that takes up about one page of a word document. On it are items like this:

ect. ect. basically everything I ever want to do, work or hobby or laziness or practicality. Things like “eating” and “sleeping” are not on the list.

This is my time management tool. There are “fun” things and “lazy” things and “project” type things and “chore” things all mixed up. Using a random number method (I used to draw from a deck of playing cards – now I use a 12-sided dice) I count down from the last thing I spent time doing and do whatever is next, giving each day a (hopefully) fair mix of “fun” and “work.” I roll the dice for things like eating and sleeping too – whatever comes up on the list at bedtime I trade for “sleep,” same for mealtimes. I roll the dice and count down the list to what’s next – say, reading – and instead of reading I eat dinner. Yes, this does mean sometimes I miss meals in favor of doing something on the list, and sometimes I stay up late to do something on the list. Those are cons.

But the pros far outweigh them. For one thing, I’m always steadily making progress on my goals – writing stories, working on my blog, watching through TV shows on Netflix, and reading good books. I don’t feel bad when I take “me time” because it’s all structured. And I never feel “bored” or like I have nothing to do.

The biggest downside really is when I have to break the system for something like the holidays. Around Christmas, for instance, there’s too much to do to stay on the list system. So I have to go commando for a few days before I re-randomize the order of the list and start again. It’s usually fine. But having this ritual of looking at the list and counting throughout the day helps keep me calm and focused. Sometimes to my detriment – it can really annoy my husband when I get bent on doing something because “it’s on the list” when he wants me doing something else. I try to be flexible and “trade” tasks for whatever he wants to do or if I need to go in to work or something like that. But it can be annoying. I understand. BECAUSE IT’S FREAKING BIZARRE. But this is my life.

This one also started when I was a kid. Initially, I had four different colored balls. Yellow for “chore,” pink for “projects,” blue for “relaxing,” and green for “fun.” I mixed them up in different orders and made sure to do one thing for each category each day. But this spiraled into listmaking: I made a list of all the movies we owned so I could watch all of them before repeating viewings. Stuff like that. Then when I was a teenager I inexplicably became a morning person: I woke up at around 4 each day and I had a little box of tiny ripped up pieces of paper with my “morning routine” on them: this included writing my daily xanga blog post, enjoying a cup of tea, and even taking naps in between getting dressed, eating breakfast, and packing my things for school.

I DON’T KNOW WHY.

Then, around the time I got a computer, I was taking an interest in filmmaking and screenwriting. I wanted to film stuff and write stuff, but when I wasn’t at school or at marching band practice, I felt overwhelmed. I needed to do homework and practice colorguard, but I wanted to study film and write scripts too. And having so much to do usually made me freeze up and not do anything.

And so, The List in it’s current form was born.

So I guess now that I’ve written it all out, it does seem like there was some level of problem-solving going on here. But why am I such a spaz that I solve problems in the most random, round-about way possible? I don’t think I’ve properly explained either of my “systems” but even if I could, it’d probably still sound like mad ravings of a seriously anxious person.

Which I guess they are.

I don’t need to flip the lights on and off to keep my family from dying or anything, but at least that sounds crazy enough that you’d feel sympathetic – clearly that person can’t help but be that way. But me? I can get off my systems, bend them, and change them. I seem perfectly capable of living like a normal human, but for some reason I chose this.

My sister is terrible at making choices. She’ll ask us all what she should do or wear or say, take votes, then ask if we’re really really sure. I think I have the same issue, but instead of finding someone to make my choices for me, I chose… randomizing.

Anyway, I don’t feel bad staying on zoloft without a “real” diagnosis. I’m pretty sure I need it. 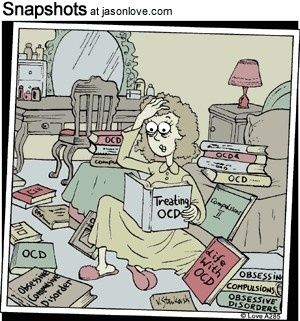 6 thoughts on “Anxiety? OCD? Or is Everyone This Weird?”