Do not read this book.

When I got pregnant, I knew I wanted to learn about natural childbirth. I’ve read a lot of books and attended classes and I am a huge advocate for birth with as little medical intervention as possible. Lamaze is the biggest name in natural birth, and this is their “official guide.” How could it be this bad? I am asking myself that as much as you’re asking me.

Let’s dig right in. I bought this at Half Price Books at the very start of my pregnancy. I hadn’t taken any classes yet but I figured I’d probably take a Lamaze class at some point. In the end, my hospital had to cancel their Lamaze classes when teachers became scarce. I looked in to taking a class elsewhere but the prices were all over the place. We happened to also be looking in to the Bradley method and their classes were much more uniform – no matter where you took them, the price and length was the same. More on that in another post.

All you need to know is that I decided to read this book before committing to a class. Let me also say that I think the actual class has to be way better than this pathetic book. I still can’t believe just how unhelpful this book really is.

Let’s start with the cover. “Giving birth with confidence.” That sounds good.

Alright so what’s going on back here? Childbirth is not a disease… so far so good. A book that tells you what to expect, not fear – knocking “What to Expect When You’re Expecting” huh? Cheeky.

Well that’s why you don’t judge a book by its cover.

Basically everything the cover says is the opposite of what this book actually is. This book is almost nothing but fear-mongering. And remember, I am pro-natural-birth and anti-medical-intervention. I am on this book’s side, but it presents its argument in crazy-talk and worst-case-scenarios. “What to Expect” was written in a WAY more positive tone with much less “do this or your baby will die” tones.

Rather than presenting traditional hospital birth as “unnecessary interventions” or a choice that simply isn’t for everyone, it colors them as THE ENEMY. Doctors and nurses cannot be trusted! Don’t even let them take your blood! THEY’LL PROBABLY USE IT IN THEIR SATANIC RITUALS.

Okay it’s not that extreme but it does err on the side of hysteria.

It refers to natural birth as “normal birth,” and it does so aggressively. I get what they’re trying to do, but nowadays “normal birth” isn’t the norm so really it’s just a rather confusing name. Everyone knows what you mean when you say “natural childbirth.” So like, calm down.

This book also promotes ideas that, if not flat out dangerous, are at least controversial – like co-sleeping. I don’t want to start a whole big “thing” here adult beds are simply not 100% safe for infants. It seems like there’s constantly another news article in my facebook feed about babies dying this way. I was shocked to see the “official” Lamaze guide not only claiming it was safe, but recommending it as the best thing to do! I personally think it’s a death wish, but some people maintain it can be done safely. Either way, there’s no definitive answer one way or the other, yet this book states its opinion as fact.

Interestingly, at the back of the book there are appendixes and charts with nothing but the scientific, documented evidence of the safety of natural birth practices vs. medical intervention. This data paints a fair picture of the risks and benefits of each. It also leaves out the questionable recommendations like co-sleeping. You guys couldn’t find any data on that one? But you still included it in the book? Right….

What’s most upsetting about all of this is that this isn’t just another birth book – it’s the official Lamaze guide. The most well-known “brand” of natural childbirth. I was a first time mom looking through the hundreds of birth/pregnancy book titles and I picked it up because it was a no-brainer. This official book had to be trustworthy. What new mom would see “The Official Lamaze Guide” and think they had any reason to doubt any of it? If this book was the only source I had of info on natural childbirth, I’d be out. No way, I’m out of here, hospital birth is the way to go. I’m not a Goddess, I want my husband involved, and I don’t want to be terrified of every choice I make. This book has to be scaring people away.

Speaking of which…what comes to mind when you hear “Lamaze?” Breathing techniques, right? Methods of relaxation for labor. Something like that. Well, in the intro of this book, it proudly states that “Lamaze isn’t about breathing techniques anymore” and that it’s no longer a “method,” but a “philosophy.” Oh boy.

I personally was hoping to learn some specific breathing techniques. I think relaxation exercises are awesome and I started learning them before I was even pregnant to cope with anxiety. I was excited to learn pregnancy-specific techniques. But here we are. Well, what about this “philosophy?”

How shall I put this? Hmm…do you remember that episode of Friends where the girls started reading the self-help book about how to be “Goddesses?” And men are “thunder-bearers” and they steal women’s “wind?”

Yeah. So this book goes on and on and on about how women give birth with other women. Only women know how to support a woman in birth. We’re all part of an ancient sisterhood of women teaching women their womanly ways. Dad who? There’s actually an entire section about “retiring the coach.” That’s Dad, Dad is the labor coach. Or he used to be. But all those silly men ever do is steal women’s wind! All a woman needs is her sisterhood.

Am I talking about labor or a witch coven? Will there be naked dancing in the woods later?

You know what else is great (and by “great” I mean “lol wtf great”)? This book has pictures! And they’re almost all of women with other women engaging in the womanly art of childbirth, the pinnacle of womanhood. 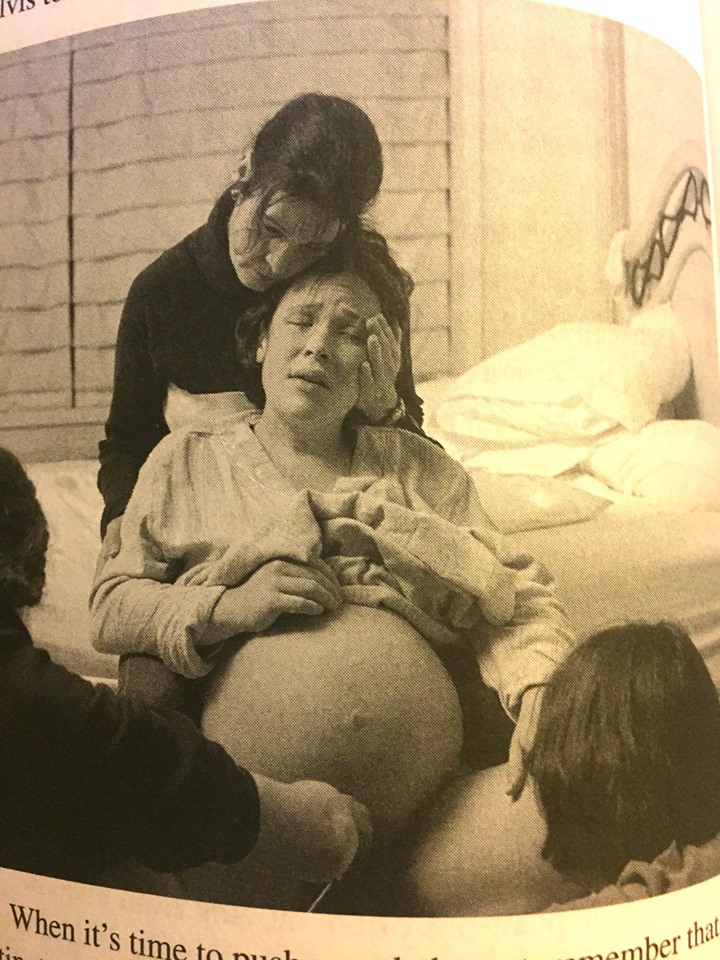 Those last two are WAY too happy.

But occasionally we’ll see a man. 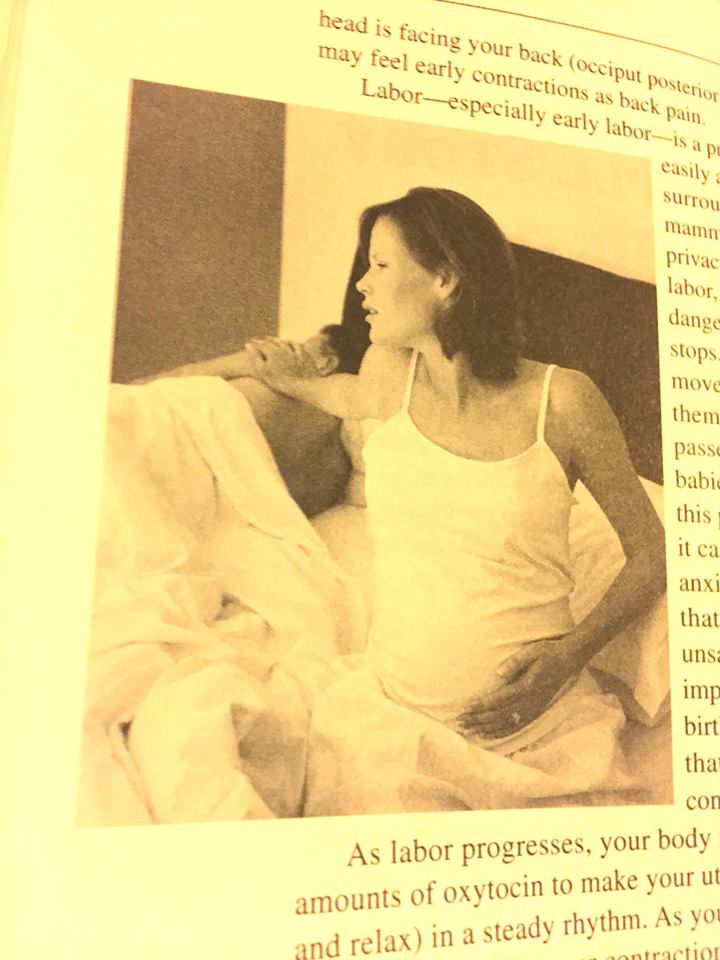 A man being USELESS. Isn’t that just like a wind-stealer?

The subtitle of the Bradley Method is “husband-coached childbirth.” It’s been a great way for us to build our relationship and a great way for hubs to feel involved in all the excitement. Lamaze seems to think husbands just don’t have a place outside of the before and after of childbirth, and I think that’s really sad.

This book isn’t all bad. The flowery emotional bits are very true and sweetly written. It talks a lot about enjoying pregnancy and reveling in the miracle of a new life growing and all that. And it has some good information. But all of the emotional stuff and the good information can be found in other books, blogs, etc. – and it’s presented in much better ways. I cannot give any reason to read this book. There are so many better books out there. Leave this one on the shelf.

I just can’t even with this book you guys. I can. Not. Even.