I’ve officially had my first pregnancy ER visit. I hear that it’s pretty common to go to the ER at some point in a pregnancy. Most of the stories I’ve heard involve a scared lady going in, getting a quick sonogram, and finding out that everything was fine all along.

Yeah, that’s not how mine went.

It all started, as most crises do, just before 5 on a Friday. Also, it was in the middle of a financial dry spell, since we had just paid a bunch of bills and were wondering just how we’d make it to the next paycheck with $30. So you know, the exact perfect time for things to go all to hell.

I started feeling like I had a bladder infection. Sound familiar? This is how my trip to the ER that eventually revealed I had endometriosis started. At first it wasn’t too bad, but it escalated extremely quickly. I felt an urgent need to “go” and couldn’t, so I called my doctor. It being almost 5 on a Friday I couldn’t just run in, but the doctor agreed that it sounded like a UTI and sent in a prescription for antibiotics. Everything was playing out exactly as it had when I discovered endo. I tried not to let that spook me. Sure, I’d never actually had a UTI before, but what else could this be?

I got my medicine within an hour and spent some of our tiny pool of money to do so, which hubs was understandably concerned about. By now the urgency was becoming painful so I was of a one-track mind. I took the pills and waited. I’d given up trying to do anything, even watch internet videos. I was just curled up on the bed as the pain got worse and worse.

Finally I decided I couldn’t take it any more and needed to dust off my hydrocodone bottle that I have for endo pain. I knew it was a pregnancy no no, and I couldn’t just take it anyway, so I called the on-call physician at the hospital. I explained about the UTI, the antibiotics, me being pregnant, and asked what I could do. He recommended an over the counter medicine for UTI pain, but remember, we had almost no money. Getting that medicine would mean coasting to our next paycheck with $0. So I told him I had hydrocodone in hand and could I take that?

He said if the pain was so intense that Tylenol wasn’t even making a dent, and I really felt like I needed hydrocodone, then it wasn’t a UTI and I should go to the ER. Hmmm. The ER was a lot more dollar signs, and not only that, but I was just so sure it was a UTI. So f*** you, Mr. It-Shouldn’t-Be-That-Painful.

So I asked hubs about getting the over the counter medicine the doctor had recommended. I also told him what the doctor said. Going on that professional opinion, he said I should just deal with it. We couldn’t afford the medicine and it couldn’t be that bad.

So I stayed in bed and waited as the pain got worse…and worse….and worse…

My dad’s band was playing at a local bar that night, and hubs really wanted to go watch. There was no cover charge and it was sort of like a date night. I was not up for it. Not at all. But I felt like I was feeling the pain wrong. Everyone was saying it wasn’t as bad as I thought. So I agreed to go. Mostly I was formulating a plan that involved asking my mom for money and walking across the street to the drug store to get that medicine.

No need, though, because I didn’t make it through the car ride. Suddenly it took a turn for the much worse and I said pull over right now. There was a gas station ahead and it felt like an eternity getting there. I jumped out of the car before it was even parked, left the door open, and ran inside. I made it to the bathroom just in time to throw up.

Just like the fateful morning I discovered endometriosis, this was what tipped me off that it was time to go to the ER. Hubs was not happy. And we were at least an hour from our hospital. We had to google for the nearest ER and just go there and hope for the best.

Of course when we arrived they sent us straight to labor and delivery. I began to wonder if I would go into labor just from the pain. We were hooked up to fetal monitoring and the baby was just fine and dandy. I thought that would be a relief but it honestly wasn’t. The nurse smiled, sure that the news that the baby was ok would cheer me up, but I kept panting and was like “Great, but I’m dying so…”

I managed to get them a urine sample over the course of a few bathroom trips. In the mean time, I had lots of time to try to make up breathing exercises and wonder what would happen if I gave birth here. I didn’t have a private room. I didn’t have my doctor or pediatrician. I wasn’t full term. I was DEFINITELY going to get an epidural because I had soared right past a 10 on the pain scale and I couldn’t lay still or obey simple directions. Husband was stressed and unhappy. Yet in my mind, I felt very calm. If I was going to meet the baby tonight in this highly not ideal situation, I was okay with that. I just felt like it would be okay.

We got the test results back and the nurse said I did have a small amount of bacteria. Not a severe infection, though, so she didn’t think that could be the reason I was hurting. She got an IV line in me and took some blood to test with the promise of IV fluids and some pain medication while we waited. I was given some kind of medication that’s actually given in labor and started to feel sleepy. My mom and sister arrived from dad’s gig, since we were near by. The medicine was working and it seemed like we were through the worst of it, so mom took sister home and I tried to go to sleep.

Then I started hurting again. We were nowhere near time for another dose. It had only been maybe half an hour. I opened my eyes and told my husband “I’m starting to hurt again.” By the time he reacted I was right back at blinding pain levels and started hyperventilating. “I need to call the nurse,” I said and reached for the button but I started shaking uncontrollably and couldn’t do it. My husband rushed over and hit it for me, then gasped and said “Your face…”

Oh God, I’m having an allergic reaction or something. He said my face was covered in splotches.

The nurse came rushing in with another nurse in tow, which is a really bad sign. They both looked terrified – another bad sign. The splotches on my face were from pain. They said I should be asleep with this dose. How could I be in pain through this medicine? Was I in labor?

They checked to see if I was dilated and needed me to bend my knees and prop them up in a fairly easy, relaxed position, but I was shaking too hard and couldn’t do it. When we discussed our birth plan, I had told my husband that if I couldn’t follow simple instructions, that’s when I’d want to turn to meds. I gave him a meaningful look and told him “I can’t.” Somehow we got through it and determined that no, I was not in labor.

The nurse came back with a doctor, who had just delivered a baby elsewhere in the ward. The blood tests were all healthy, and through all the screaming and shaking and panting, the baby remained as happy as a clam. The only thing they figured it could be was… 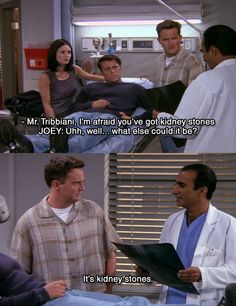 There wasn’t a great way to test for it. Ultrasounds aren’t great for this and x-rays are obviously too risky. The nurse very apologetically told me that I had to go home now, and wait for them to pass. If it got worse, they said to go to my ER where my doctor was. I asked if I could just go downstairs to the ER now, but they said it would be better for me to go home, try to sleep, drink a TON of water, and wait. I asked if I could get an epidural, knowing that’s a great painkiller. The nurse patted my arm and told me I didn’t want that. This nurse – Dawn was her name – she was so awesome. I’d go to hell and back with her. So I took her word for it.

Around this time I finally vomited again. I felt a little better. I knew that it probably looked bad to my concerned family for the doctors to be sending home the shaking, patchy-faced, vomiting pregnant lady, so I sat up and tried to understandingly agree and sign the discharge papers and look dignified.

The doctor and the nurse reiterated over and over that kidney stone pain was just like labor pain- maybe even worse, because in labor you get breaks between contractions. For the first time in my pregnancy, I was looking forward to labor.

We walked past the nursery and dad insisted we stop a minute so I could stand up carefully and look at the babies. “If that doesn’t make her feel better, nothing will!” I love my dad. And seeing the little wiggling babies did make me feel a little better.

Once we were at home, I took my cocktail of vicodin and benadryl, took a warm shower, and did manage to sleep for about 4 hours at a time. Around noon the next day, while I didn’t meet my baby, I did get to meet three tiny kidney stones. I named them “Go,” “To,” and “Hell.” And flushed ’em without a second thought. Probably would have been wise to keep them so we could maybe test them or something, but who am I kidding, we couldn’t afford that.

I then immediately threw up all the water I’d diligently drunk, and some of it was still ice cold. Husband rushed in and said if I did that again we’d have to go back to the ER. I told him I’d passed the stones. Then I climbed into bed actually feeling better for the first time since the 15 minutes of working medication, and slept a lot.

One huge positive came out of this, though, and that was the demystification of labor. It wasn’t the most painful thing in the whole wide world. I did something harder, 19 hours of passing kidney stones with no breaks in the pain at all. Well hell, that makes labor look almost pleasant by comparison. Okay, maybe not, but it at least looks doable. I know what kind of pain to expect. I know I survived those levels of pain before and can survive them again. Through everything, my mind felt clear and I felt like I was in good hands, even at a strange hospital with strange doctors.

If I felt confident I could give birth in the wrong place with the wrong doctors at the wrong time, then just imagine when I’m at my hospital with my doctors at full term.

So thanks, Kidney Stones. I think I’m ready now.