I didn’t want this entire blog to become a pregnancy blog, but the video is taking longer than expected so here’s more pregnancy news!

I did the Glucose Test (for gestational diabetes) a couple of weeks ago and I was really nervous about it. Even though my own mother swore it wasn’t a big deal, I had heard so much from other people about how awful it is that it seemed like a big deal to me. I think my brain filed it under “academic tests” rather than “medical tests” because it seemed to me that I was as unprepared and fearful as if I thought I would “flunk out” of pregnancy.

The only tangible reason I could give for being nervous was that if I did test positive for gestational diabetes, I would probably not be allowed so much sugar. And look, I know, I know that sugar is really bad and I should be eating healthier. I’m a health blogger, I know that sugar is basically satan himself. But lately I have been craving it like mad. My crazy pregnant lady cravings went away a long time ago, but now they’re back with a vengeance. And instead of pickles and greens (which I couldn’t get enough of in the beginning), now all I ever want is something sweet to eat. I’ve noticed that my belly isn’t so hard now – there’s some, er, padding, as it were. Because I love cookies and candy and oh my God it is taking all of my self control not to stop typing right now and go eat a handful of chocolate chips.

ANYWAY. So I was worried that I’d get locked up in some sugar-free prison. Well, the big day came as big days are wont to do, and I dutifully rose early after fasting and faced the dreaded glucose drink. Now, I had some reservations about this. People said it tasted like flat, too-sweet soda, which I thought sounded yummy enough. But they always said it like it was a bad thing. I had heard it called “sludge,” “toxic slime,” and “gag juice.” So I wasn’t too excited.

The kind I picked out was clear (no dye) which I thought made it seem more approachable, and “fruit punch” flavored. And it was fine. I mean, not a drink I’d choose from a line up but not a horrible way to start your day. I’m a slow eater/drinker, so the biggest challenge was finishing it off in the allotted time.

So I went to the doctor and rolled up my sleeves because somehow I didn’t realize the blood test would be a finger prick and not a blood draw. I’d never had a finger prick before. It was basically exactly like this: 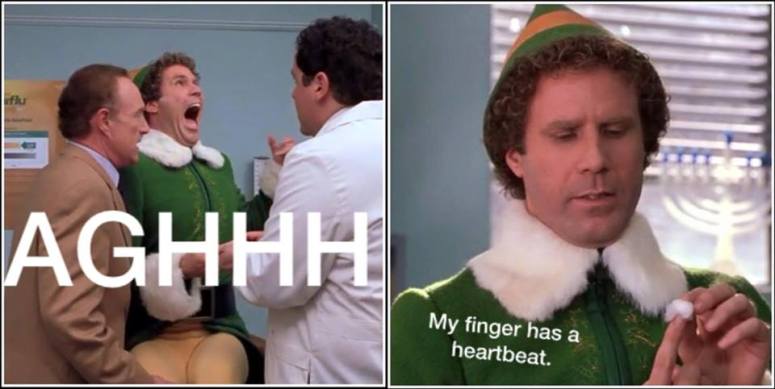 I didn’t think it’d really hurt but DAMN that stings! Like a tiny evil ninja!

So I felt pretty good. I passed the test immediately and was on my way home with narry a care in the world. Man, this glucose test really wasn’t a big deal after all!

Except that the story isn’t over yet.

I was waiting for the receptionist to run my card and started feeling a little woozy. Then a lot woozy. To the point that she looked up and said “Are you alright?” and I took a deep breath, laid down on her desk, and said “I feel a little dizzy.”

So she called another nurse over who rushed over with a chair. Now the room was spinning and I realized oh dear, I’m going to barf. So I said “I feel like I’m going to throw up. Can I go to the bathroom?” because the bathroom was literally 2 steps away. And they said no, I can’t, because I might fall. And I was given a trash can. And also terrifying all the other patients who were also pregnant and probably didn’t need this kind of trauma.

I leaned over and suddenly felt much better. I rested my head inside the trashcan between my knees and said in a trash-can-echoed voice “I feel better like this.” The nurse put a cold paper towel on my neck and said it was because blood was rushing to my head. “Is that good?” I asked. Affirmative.

So I hung out there (literally) for a while. Then I was given a bag of animal crackers and told to go home straightaway and eat lots of protein.

After that, it was an uneventful day full of peanut butter.

So the glucose test really isn’t a big deal. Except when it is, sort of. But at the end of the day I didn’t throw up and I got to eat lots and lots, which is what I like these days, so I suppose I lived happily ever after. The end.