Zombies have been hugely popular for my entire adult life. It’s a trend that hasn’t seemed to get old or die down, and you see it everywhere. Zombies are nothing new, of course. In fact, the old 1960s-1970s zombie movies are some of my very favorites. But zombies have gone from being a movie monster or the center of a disaster movie to being their own genre.

Now, I’m not an expert or a mega fan, but I think zombies started their rise to mega popularity in 2002 with 28 Days Later. Zombies started cropping up in films more and more, until they were so prevalent that that they got a super successful spoof movie, Shaun of the Dead, in 2004. Nights of and returns of and days of the Living Dead seemed to come out left and right, and zombie movies were no longer for a niche audience. Major blockbusters like I Am Legend and World War Z brought it much more than the normal horror movie crowds, and zombies even found their way into family films like Pirates of the Caribbean. 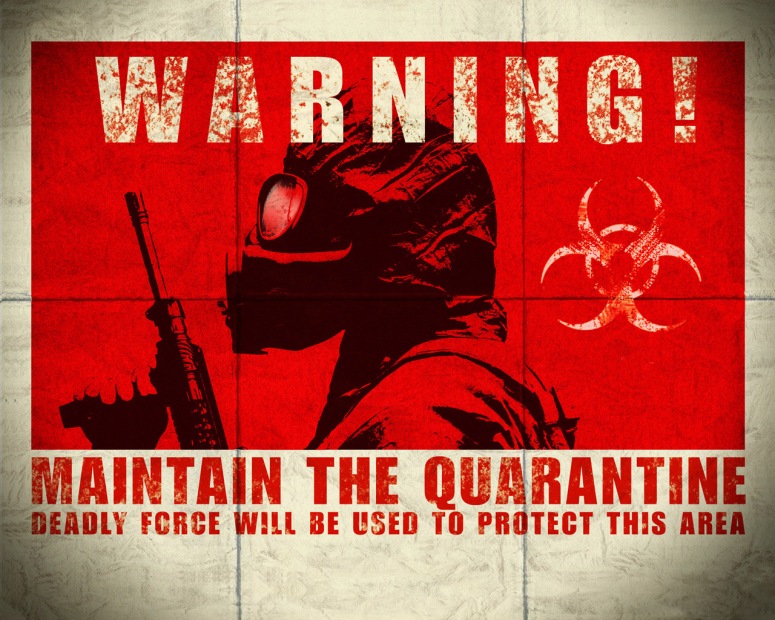 But it’s not just movies. Zombies have taken over every facet of media possible. Zombie games are wildly popular. Resident Evil became such a popular series, starting way back in 1996 and still releasing new games today, that it got a slew of movies as well. Dead Space, Left 4 Dead, Lollipop Chainsaw, The Last of Us… these are all games that are so popular that you’ve probably heard of at least one of them even if you’ve never played a video game in your life. There are literally hundreds of zombie games to choose from for every platform out there. 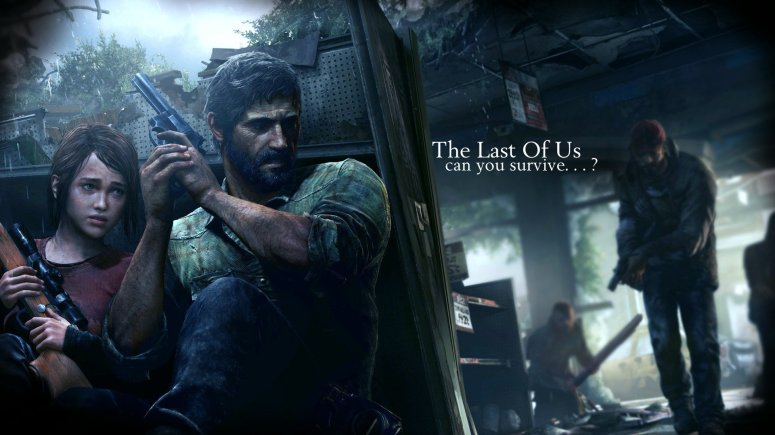 And of course, zombies have invaded the world of television as well, most notably in The Walking Dead. The fan base for the Walking Dead is insane, there are actually conventions dedicated solely to this one show. The only other time I’ve heard of a convention for one show is Star Trek, and that’s no small banana. Just think about that for a second – The Walking Dead has been on for five years, and they have a fan base similar to Star Trek’s – a show that began in 1966. That’s insane. And like the films and games that sport zombie disasters, this show has drawn in people of all demographics, not just the horror crowd. My dad has never watched a zombie movie in his life – and doesn’t care to – but he LOVES The Walking Dead. 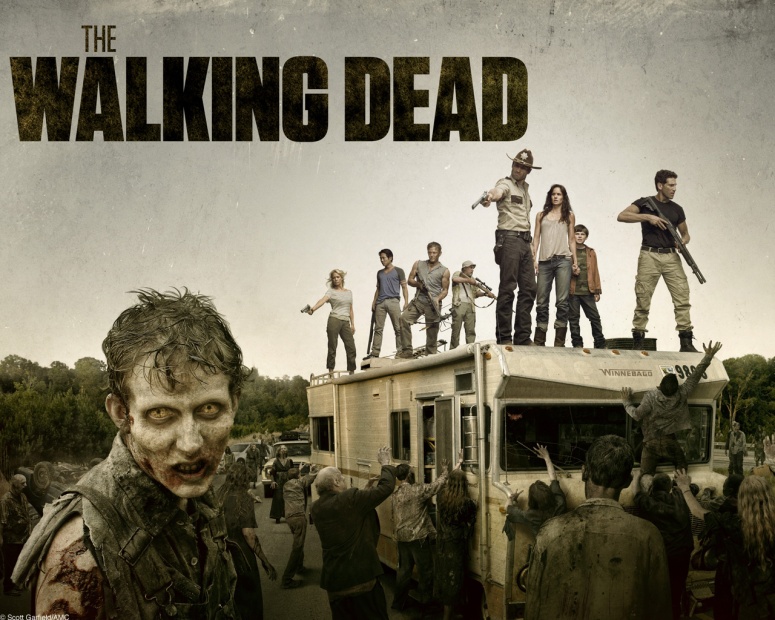 So what’s up? What does any of this have to do with invisible illness? Well, have you ever wondered why you see so many zombie trick-or-treaters these days, or why the CDC has released a protocol for a zombie outbreak? Well, it has a lot to do with chronic illness.

Trends in horror/disaster movies tell us a lot about what we as a country currently fear. In the 70s, slasher movies were all the rage. Teens were routinely killed off in slashers as punishment for getting drunk, having sex, or doing drugs. It showed a fear of repercussions for being rebellious, and a fear of murder.

Disaster movies reigned over the late 90s and early 2000s. With doomsday fears for the new millennium and the Mayan’s 2012 end-time prediction,  movies like Independence Day, Armageddon, The Day After Tomorrow, and of course, the film 2012, played on these fears.

So now we’ve got zombies. What does it mean? America – and perhaps the world – is terrified of illness. Illness is the new great disaster. We see this not only in zombie apocalypse fiction, but in the news every day. From swine flu to ebola, we’ve had CNN offer 24 hour coverage on more than one medical “emergency” that really turned out to be no threat at all. Add in the recent outbreak of “bath salt” murders – which usually involve a druggie with seeming immunity to pain eating other people – and you can see that our love of zombies indeed stems from a real fear. 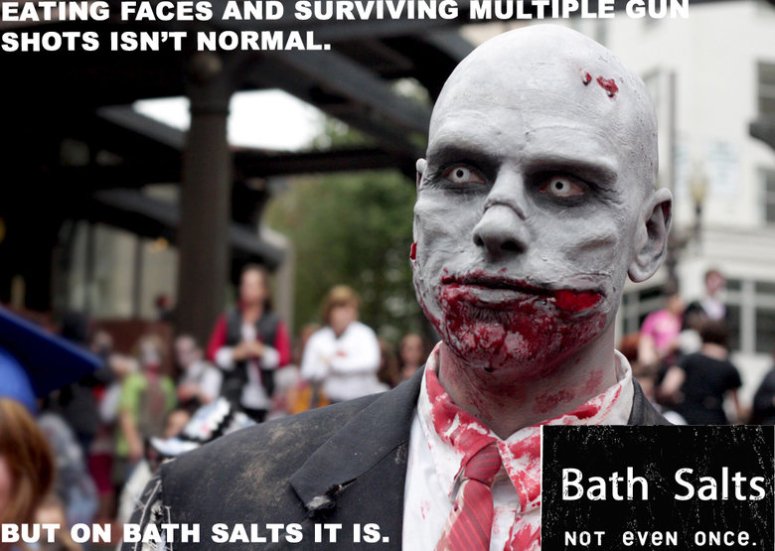 Something I’ve read on a few blogs dealing with life with chronic illness is this advice on understanding the reactions of the people around you: the reason it can be hard for friends and family to talk about your illness or sometimes even be around you is because your illness becomes a reminder of their own mortality. Now, rarely do I think that my friends or family are actually struck with macabre thoughts of death when we talk about my illness. But I do believe there is a subconscious connection there. It is frightening to think that one day, a germ, a growth of tissue, or a mis-shot nerve impulse could remove your abilities or even identity. That’s true horror.

I’ve watched people slip into Alzheimers and dementia. I’ve seen my sister have countless seizures that she doesn’t remember happening. It is draining. To spend time with people when they are suffering and not themselves is real life horror. No, I don’t need to shoot them in the head, but in a way it is worse to try and help. Because I love these people, I don’t actively try to avoid spending time with them, even though the heartbreak of it is exhausting at the end of the day. 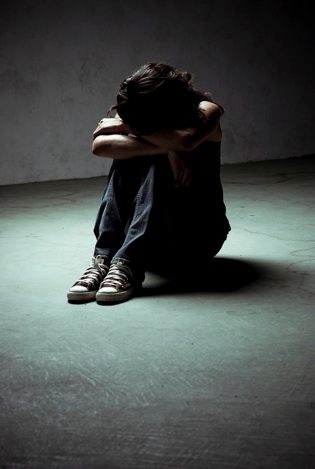 But I know what people mean when they say that illness can remind us too much of our mortality. Subconsciously, I do believe it might make some friends turn down an invite to hang out if you have a chronic illness. Forgive those people. Keep inviting them. Remember that you have the same feelings about death, sometimes at the surface, sometimes deep below. And remember that part of their fear comes from love – a sincere love for you. They desire your wellbeing. It hurts them to see you hurting.

I’m lucky. Most of the time I feel fine or can fake it. I can still think and talk as myself. I have independence. I don’t need a lot of physical help. I know it was hard for my husband and parents to be with me in the hospital after surgeries. I know I wasn’t myself then. I know I cried for things I couldn’t have, and I know that’s terrible. I’m so grateful for their love and willingness to not turn away from me when I’m not myself.

But when I’m medicated and hurting and crying nonsense, I am a zombie. I look like Rachel, but I don’t act like her. Luckily, though, I come back. This isn’t a horror movie and I won’t hurt anyone. They need only wait a bit to get me back. They always keep their sense of humor in tact, and have always been able to laugh because they know I won’t be a zombie forever. Mom always laughs when we talk about the morning I needed to go to the ER for the first time, and she told me to put on shoes. I was in a frantic state of panic and pain and exploded with “Do I NEED shoes?!” My husband laughs when he recalls how after surgery I’ll ask the same question over and over and over. I laugh too. All comedy is tragedy plus time.

But some “zombies” don’t get better. Sometimes, in real life, people become ill and they aren’t themselves ever again. This is our worst nightmare, because you can’t do anything to help, but you also can’t do anything to stop it. You don’t know if it will happen to you or your spouse or your parents, but you’ll probably encounter a “zombie” at sometime in your life. 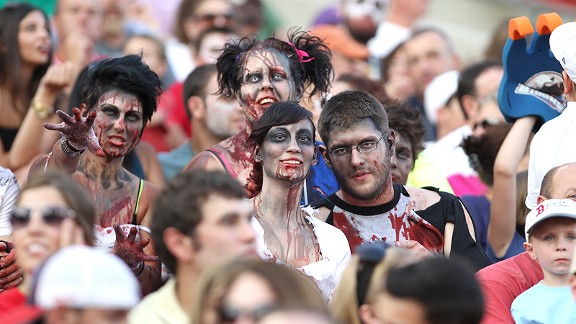 But here’s the good news – we’re coping with it. We’re coping with our fears healthily. That’s what zombie movies are. That’s what zombie games are. That’s what The Walking Dead is. We’re not turning away. We’re exploring our fear and letting our feelings out through catharsis when we flock to the theaters. Every movie is therapy. That’s why women watch chick flicks when they’re already sad. That’s why we get excited to see a horror movie about something we’re afraid of. That’s why we say “Wow, that looks really good” when we see the trailers for the Oscar bait movies that are almost always about unfathomable tragedy.

In a way, dressing up as zombies for Halloween is almost like the Day of the Dead celebrations in Mexico. We honor death and celebrate it – though our way is decidedly less beautiful. 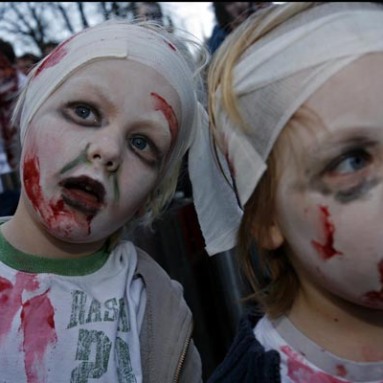 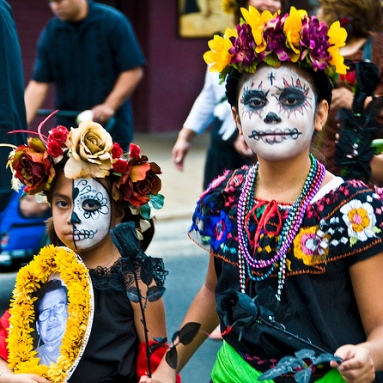 What do you think about the zombie phenomena? Are you a big fan? Even if you’re not, have you still seen a zombie movie or played a zombie game? What do you think the next big horror craze will be and why? Tell me about it in the comments! And thanks for reading.

4 thoughts on “Let’s Talk About Zombies”