If you follow me on Twitter or Instagram, you’re probably aware that last night I had the honor of being a VIP guest for the opening night performance of the Newsies tour! This was a truly once-in-a-lifetime experience that I was lucky enough to win via an instagram contest. My photo had the most likes last Monday, which gave me a 1/5 chance of winning the VIP ticket drawing – and as you can see, the odds were in my favor!

I want to give a huge thanks and shout out to the Winspear Opera House, AKA the AT&T Performing Arts Center. They have really made an effort not only to reach out to their fans, but to host the best performing arts events for people of all incomes. The VIP experience is usually reserved for rich philanthropists who can donate thousands of dollars to support the theater. As a young artist married to another young artist, I’m positive that even when I do make enough to donate to the arts in my area, it won’t be enough to label me a VIP.

While you may not be able to attend as a VIP, the AT&T Performing Arts Center has LOTS of opportunities for young fans without much money to get in to see these shows. Stay tuned – at the end of the post I’ll tell you how YOU can not only get in, but get front center tickets without being a big spender.

Since most of us will never be VIPs, allow me to share the magic with you. This all started at another awesome venue that will get its own Chronic Travel Bug post, the Alamo Drafthouse. I’m spoiled rotten and now my patronage is exclusive to Alamo – I cannot make myself see movies anywhere else. They show old and new movies, and they serve food kinda like Studio Movie Grill – except it’s REALLY GOOD and they have menus themed to each movie. Plus they have quote-alongs, sing-alongs, and Rocky Horror-style act alongs with props and everything for TONS of movies. The AT&T Performing Arts Center sponsored a FREE sing along showing of Newsies, and since my husband is a HUGE fan I didn’t hesitate to reserve seats. At the showing, they announced the Instagram contest to become an “Honorary Newsie” and win VIP tickets to the show. I thought that probably meant tickets way up in the back of the balcony with maybe a shot at snagging a few autographs at the stage door.

I was super excited to check out this free food situation. With the meds I’m on right now I couldn’t indulge in the fine wines available, but they didn’t hesitate to mix me up a Shirley Temple. Plus they had a variety of snacks, salads, meats, cheese, crackers, fruit. And if you’re not in the VIP lounge, they have a restaurant downstairs (menu by Wolfgang Puck) along with concession stands if you prefer Swedish fish over salmon fillets. They even have resealable tumblers for both alcoholic and non alcoholic drinks – that means you can take your drink into the theater if you don’t finish it before the show or during intermission. 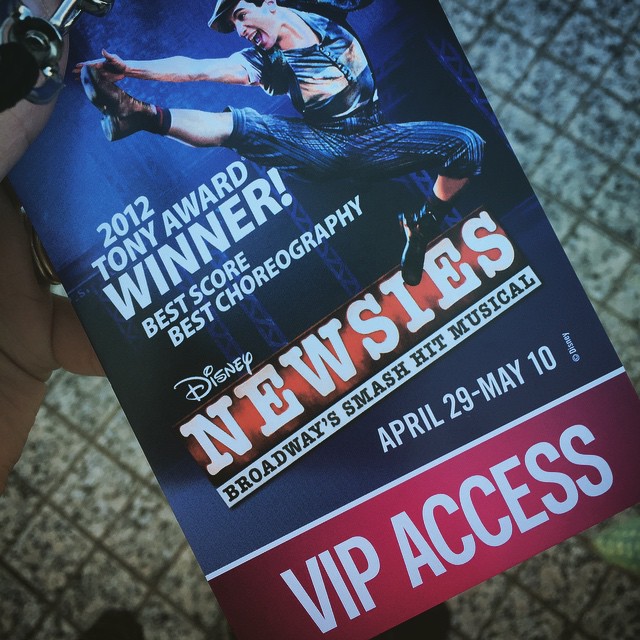 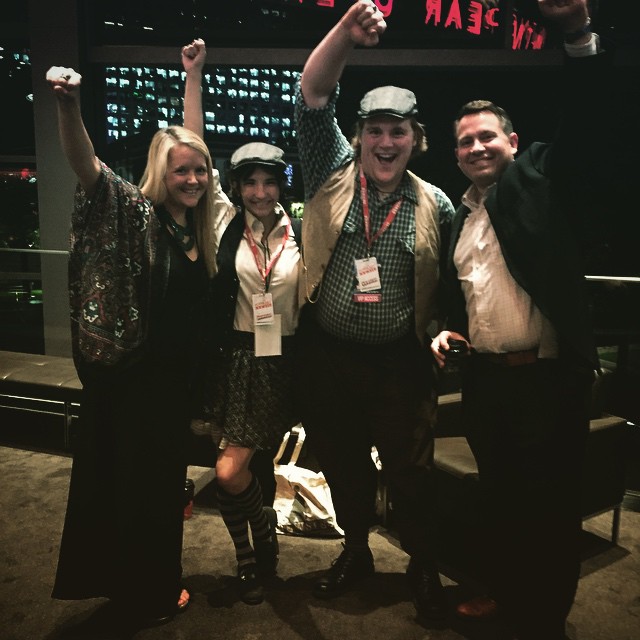 A sweet couple (and huge Newsies fans) asked for a photo with us in the VIP lounge. You can see that we didn’t really look like the typical VIP crowd, haha. But that was good, because everyone knew who we were right away. “You’re the Honorary Newsies! You won the tickets! Right this way, please have some more food, get another drink, eat as much as you like! Don’t hesitate to mingle!” They were genuinely happy to have us, and no one treated us like less than equals.

But VIP lounging aside, how was the show?? I was live-tweeting all night, but here are a few highlights:

Tobin Ost’s set is blowing my mind – it’s a character in its own right. #newsiesindallas #NEWSIESonTour @ATTPAC

Not sure how I feel about the reporter being female and a love interest- kinda contrived but Stehanie Styles is adorable. #newsiesindallas

And can we talk about the dancing? Sliding around on newspapers and just AMAZINGNESS by Gattelli #newsiesindallas #NEWSIESonTour

I didn’t talk about Jacob Kent yet- in love with his voice. Stood out from the rest, which is perfect for Davey’s character #newsiesindallas — Rachel Meeks (@DoILookSick) April 30, 2015

If you want to read my entire play-by-play, click HERE to check out the Storified version! More pictures over there too!

We had front and center seats – close enough to see spit fly whenever Dan Deluca’s Jack Kelly became impassioned. I’ve only been seated on ground level at the Winspear once before, when the Hubs did a set for a new opera called Everest (and my God, if you ever get a chance to see it, pay whatever the ticket price is. I’m getting off track here but I’ve never seen anything like that and I want it to become a thing. MAKE IT A THING.). I’ve seen a ton of shows from the balconies though and that’s still awesome. I saw Les Mis from aloft and it was amazing how close it all felt even so far away, if that makes sense. It’s a great space and the Winspear has an awesome variety of things coming through, from new English operas like Everest and Death and the Powers, to sweeping broadway musicals like Les Mis and Newsies. If I could see every show that comes through here, I would. It’s my favorite large theater to see live shows at here in Dallas. Way better than Fair Park.

If I was impressed with the VIP accoutrements before and during the show, that was nothing – NOTHING – compared to the VIP party afterwards. That’s me and Hubs with Dan Deluca and Jacob Kent. Just check them out in action for a minute here….

Yeah, after OVER TWO HOURS of jumping around like that, they sat down, had dessert and drinks with us, and talked to us one-on-one for like, 20 whole minutes. US! Totally un-special, nobody us. And we talked a lot about the show and stuff but we talked just as much about US, who are we, what we do, I mean….it was crazy. They were so nice. So enthusiastic about everything they’re doing. So happy to meet people and make friends with them.

Dan played Jack Kelly, the star of the show, and Jacob was the amazing “brains behind the operation” Davey, Jack’s right hand man. 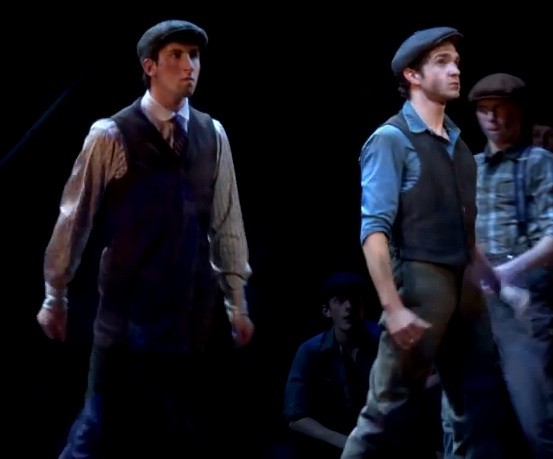 We got to meet a few other cast members briefly, but the other one who really, you know, sat down and talked and ate with us and laughed and really bonded with us was Mike Ryan, who plays one of the “bad guys” – the Delancey Brothers. I wish we had gotten a picture with him because he was so nice and so funny – he introduced himself and told us he played a Delancey and I was like no way! This nice guy? They cast him as a mean bully? He’s a chameleon, this one. Keep an eye on him.

So onstage, these guys killed it. Offstage, they were just as amazing. So you know what that means, right? You need to see them! I MEAN IT. YOU NEED TO SEE THEM.

But Rachel, you might say, I can’t afford it! And YOU won the free tickets contest, so how am I gonna see it? Well, I’ll tell you. For one thing, Newsies hosts a student rush – that means that if you have a current student I.D., you can show up and get $25 tickets to the show!

Newsies has also adopted a trend started by RENT in an effort to make sure anyone who wants to has access to theater – a ticket lottery! This means that if you show up before the show and put your name in, you get a chance to have your name drawn to win $25 tickets too – but unlike the student rush tickets, these are for FRONT CENTER seats like we had. And in Newsies, that means you get to catch pages of newspapers as they fly off the stage. For $25? That is UNBEATABLE.

But Rachellllllll, you might say, I’m not IN Texas. Fear not! Because the Newsies tour is going all over. They wrap up here in Dallas with their last show on May 10th. After that….

They’ll be all over. And you do NOT want to miss this. This post does not begin to cover all the amazing details of this show. I couldn’t possibly do it justice. And not only is it put on by talented people, they’re good people. Every bit as loveable as the characters in the show. Hang around the stage door because they are not a snobby bunch. They love their fans. And if you are in Dallas, the AT&T Performing Arts Center itself loves fans.

There is just NOTHING like live theater. If you’re not a big musicals person, maybe you don’t see Newsies. Maybe you hold out for operas like Everest that are modern and new and different than the classic song and dance routine. But it’s an experience unlike anything else. Better than TV or movies, like, no contest. AND I LOVE MOVIES.

Plus, if you’re like me and you have a chronic illness, live theater is the perfect adventure to go on. Comfortable seats, longer shows to relax and enjoy, and a bit more of a comfortable, posh environment than your average movie theater. It was actually kind of a “bad day” for me – I was feeling pretty terrible. But with comfortable accommodations and a show that transports you to another world, it was easy to forget that I was feeling particularly sick and tired.

Call up your local theater if you have any special needs or accessibility issues – these people are passionate about what they do, and they want live theater to be available to EVERYONE. Why else would they give away a VIP experience to someone like me? Someone they don’t know at all, someone they *hope* will give them a little social media exposure, someone without thousands of dollars to donate, someone with no name-dropability or impressive connections. Just a young fan.

Being married to an actor, I can tell you – they don’t just want to perform for the elite. Theater folks are evangelical – they want to fill up a theater the same way pastors want to fill a church – with ANYONE. With EVERYONE. Because it’s something that good – something that everyone should experience. The Arts are as relevant to the rich social elite that run the city as much as to kids in public school with dreams of any kind. And this show? This show is about kids. Poor kids. Kids with no ladder to climb, no place in the world, and nothing to their name. It’s about literally the lowest, most invisible people overcoming adversity. And that’s something we all need! Whether you have an invisible illness and you want your rights recognized by your employer or school, or you’re a part of the minorities who are wondering about their place when they seem to be hurt and killed because of the color of their skin (I know, I’m getting all deep here. That’s what theatre does to you.) – Newsies is for you. It’s a story for now. It’s a story you should see, whoever you are.

Well? Have you bought tickets yet? What are you waiting for?