If you thought the wild orange in the living room when we moved in was crazy, you ain’t seen nothin’ yet. While the living room had a kind of charm to it, the kitchen was…. well…..

RED. Really, really red. As in when I brought home a bunch of paint chip samples, it was in the “accent” category which strongly advised against ever using it on a wall, ever. But apparently the previous home-owners were above such advice.

When we excitedly showed our parents the house when we bought it, they just loved everything – until they walked into the kitchen. Both sets stopped, eyes wide, and said “….what are you going to do?”

Good question, parents. Good question. We thought about just repainting everything, but what? White? The walls were very odd shapes and, to the previous owner’s credit, the red was generally in small surface areas. But something had to change. I was sure a kitchen this red would give me kitchen rage.

We did a lot of brainstorming and the bright side of the whole thing was that we both are actually rather fond of the color red. Red is my #1 wardrobe choice and, as you can see, it’s also the accent color for my blog (though I didn’t make the background a blinding red – you’re welcome) ((though with the way some of you hate on my black background, it seems like it might as well be!)). I’ve even had fire truck red highlights in my hair.

Most of all, though, the red made us think why not do a Mickey Mouse theme? I already had a mickey mouse tea kettle, which is one of my favorite possessions, and we’re avid collectors of Vinylmation – little three inch figures shaped like Mickey that are all painted differently. We have somewhere between 200-300 actually, and they all need to go somewhere…

So we agreed – the red could stay. But it needed a serious attitude adjustment. So I pulled up pinterest and a photoshop window and started brainstorming. 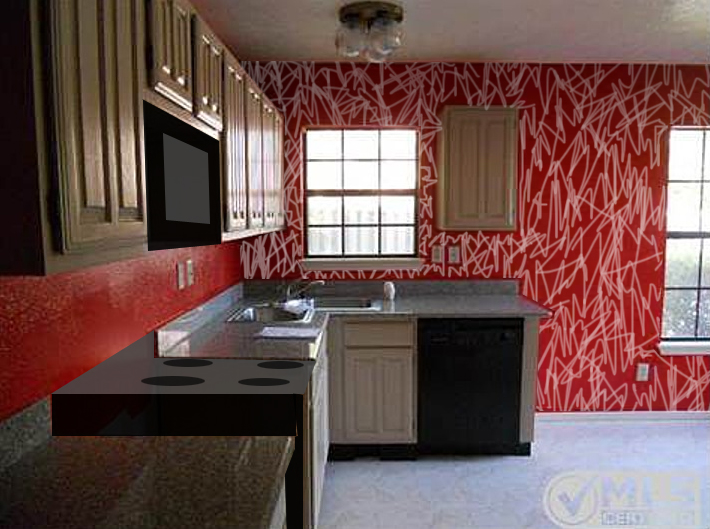 The first idea I tried was an effect that could be accomplished by tying a thick thread around a paint roller to create a messy overcoat of white. This would be the easiest solution. 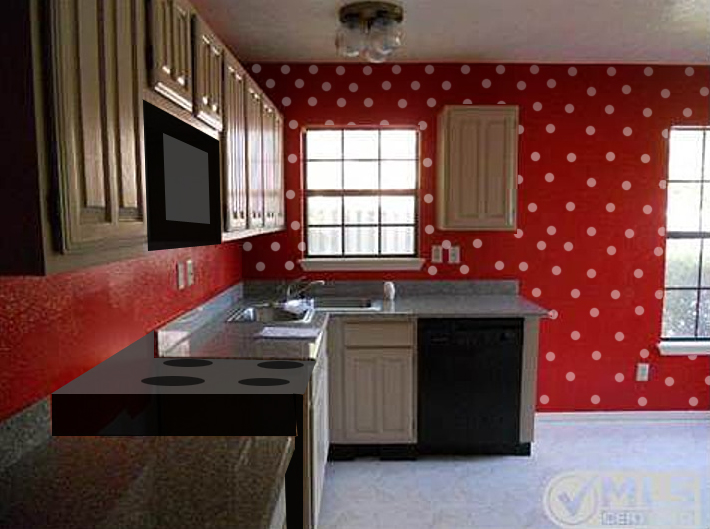 My second idea channeled Minnie Mouse, and could be accomplished by creating a stencil. This idea would be harder but still do-able. 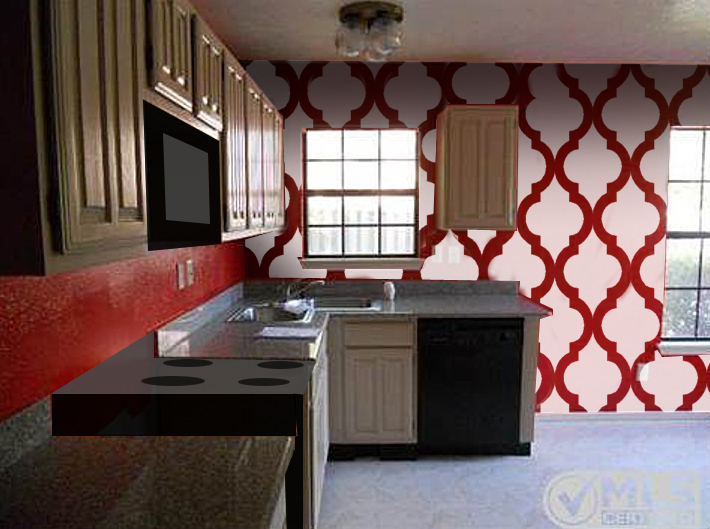 Finally, I tried this Moroccan pattern. And of course, we all fell in love with the idea that would be by far the most difficult to execute. According to pinterest, this could be done by creating a stencil of one shape and painting it. I thought it just looked way too hard, but my very artsy mother took a look and said don’t you worry my child, I’ll do the whole thing for you.

And she did! But it wasn’t as easy as that already very hard method. We tried it, but the paint bled over the edges of the stencil because the wall is textured – of course! Thanks again, previous home owners!

Attempt #2 was to cut out the desired shape and use pencil to trace it on the wall, using a ruler to space them out and such. My saint of a mother created countless such stencils and traced and traced and traced but it would not line up properly. Her shapes were perfectly symmetrical, none of us could figure out why the pattern wouldn’t fit together. There’s only one person in my family that is mathematically inclined, and she’s off at college getting a degree in math. So we were on our own, and very stumped.

After much frustration, my mom refused to give up. She got out a paintbrush and, over the course of months, did this entire wall BY. HAND. 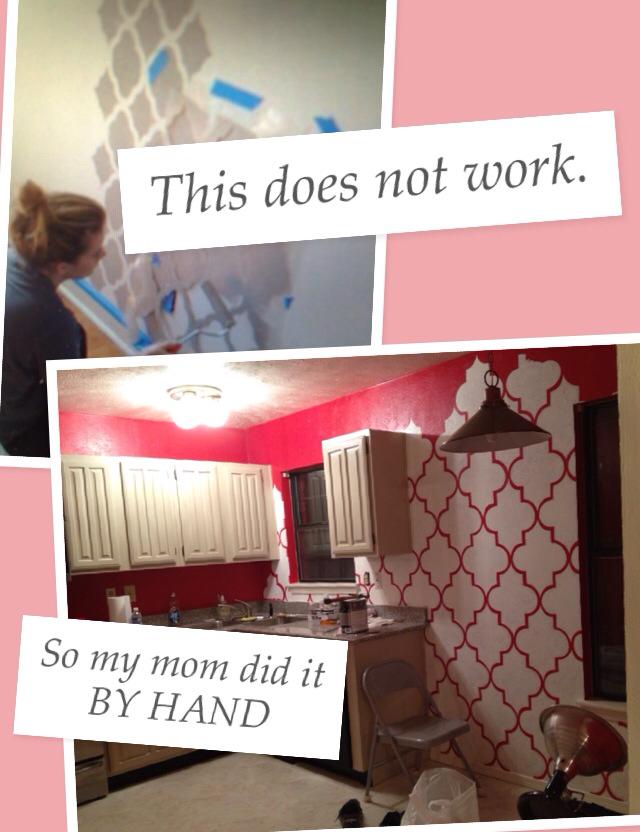 Yeah. SHE’S AMAZING. Really all I did was have an idea and she was like BAM HERE’S A MIRACLE KITCHEN FOR YOU.

The cabinets were also falling apart, literally. Luckily I married a carpenter. Do you see a pattern here? Haha I just dream up ideas and I have a team of people with actual talents to make it all real. Hubby did an amazing job rebuilding the shelves. I bought contact paper that looks like wood (I liked the wood look, haha) and covered the boards. See, I helped!

After that, Mickey-fying the kitchen came pretty naturally.

We started with that tea kettle of course. It’s a perfect centerpiece for the kitchen as a whole. We also registered for a lot of fun accent pieces, like the glove oven mitt you see hanging in the background.

The Mickey painting you see there has been hanging in my bedroom since I was a little girl, along with the Mickey pinwheel. I forgot to snap a pic, but we also have a framed & signed photo from Mickey and Minnie that was waiting in our hotel room for us on our honeymoon hanging on the opposite wall.

We got the adorable curtains off of etsy, and the little Mickey and Minnie plushes in the window were a gift. They’re SO precious!

And of course, there are Vinylmation shelves EVERYWHERE! What’s really crazy is that this isn’t even our entire collection – there are more in our movie/game loft. 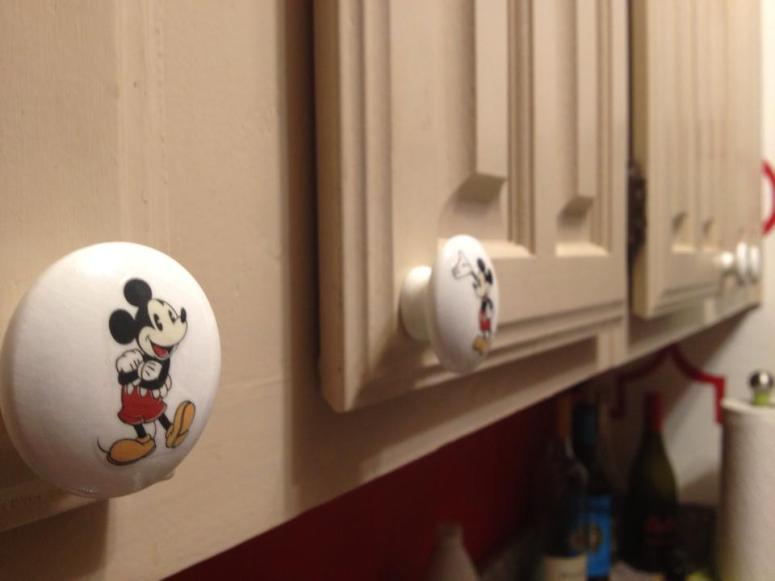 We found these knobs on Amazon, and I love that each one is different. 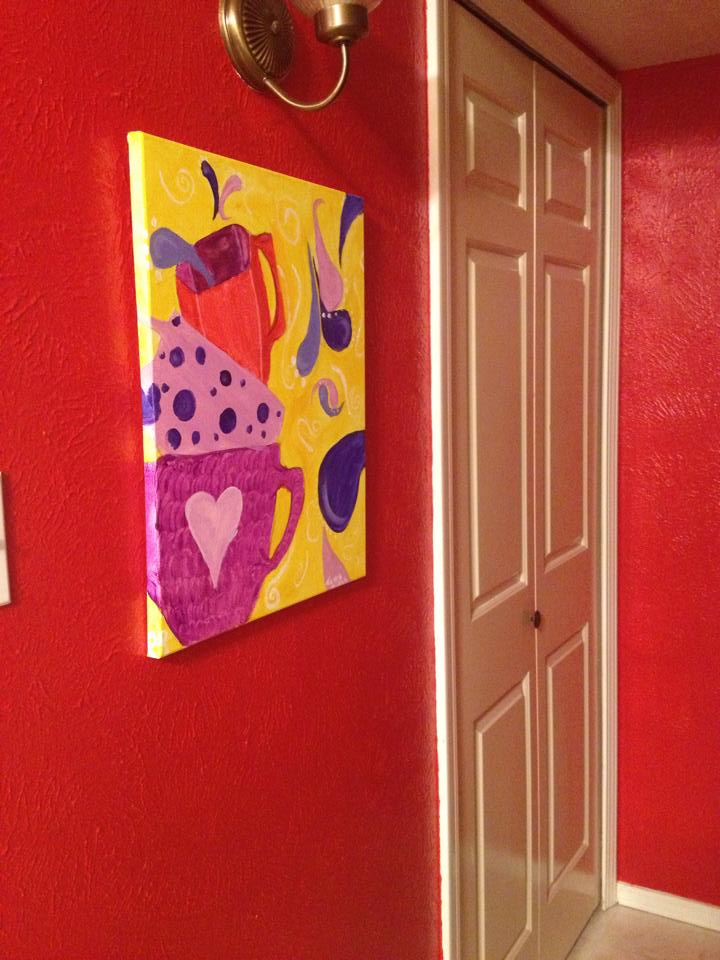 This painting is actually by my multi-talented husband – we each did one at one of those paint & wine parties. My version is hanging in my office at work. 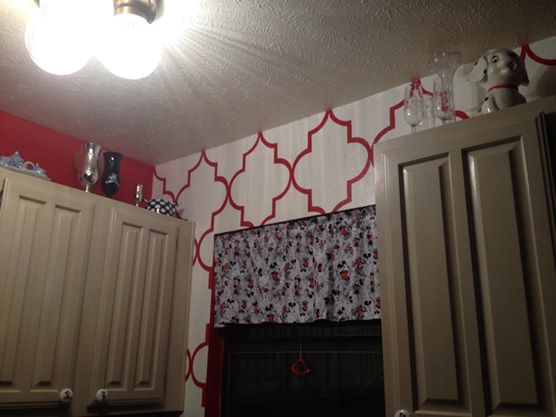 And I just LOVE having that shelf room to display out glasses and teapots. Can you spot my dalmatian puppy pitcher? I found it at an antique store in Denton and I love being able to display it an see it every day!

As you can see, the kitchen is still very red, but I think it’s much less RED and angry. A little magic from Mommy and The Mouse was all it needed.