You know when you start a dog story that it most probably has a sad ending. Well this is my real life dog story, and I need your help to keep it from having a sad ending.

Recently I posted about adopting a new dog. I strongly support adopting from your local shelter, and if you do too I know you’ll help!

I said before that he chose us, not the other way around. He turned out to be a very shy pup with anyone but us. He follows me around like a baby duckling. He’s put on a little weight but he still has a ways to go before he’s out of the underweight woods. Today we had him neutered, and while he was under the anesthesia they did an xray to see why he’s been limping. We hypothesized that he was recovering from an injury, and physical therapy would have him strong and running.

When we took him in for his pre-op check up the vet said he more likely had a recent injury but agreed that it looked to be healing. I told them that he doesn’t cry and he even walks up and down stairs, but the vet said that it simply “isn’t in his nature” to show pain. Most dogs, especially male dogs, hide pain as much as possible on the instinct of wanting to please the pack – boy does THAT sound familiar. They also said that humans are total wimps compared to dogs because dogs have a waaaay higher threshold for pain. So I guess I should have gathered that there was a good chance the problem was worse than it seemed.

The vet called me as soon as he was out of surgery and assured me that Dudley did very well. Bad news though. The xrays showed that his leg was broken. Broken?! I had him walking up stairs and yesterday he played in the ice and slipped all over the place… broken?! I was panicked. I cried. I knew very well that broken bones don’t kill animals (unless they’re horses. Or characters from young adult novels.) and logically I knew everything would be fine. I also told myself it was inordinate to flip out emotionally for a dog you’ve only had for two weeks. But that had no impact on the emotional distress I was suddenly possessed by. Worried sick – and I still can’t tell you what I’m worried about. I’m just concernicus.

The doctor used the word “fracture.” Of course, my well educated mind thought back to biology, and I thought of this:

But no. You don’t have to play I-spy with Dudley’s x-ray. First, though, let’s learn a little bit about dogs.

Here’s a look at a normal, healthy dog leg: 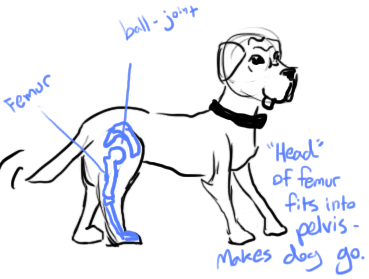 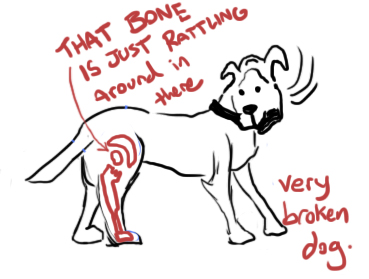 Yeah. Yeah, when the vet said “broken” he meant broken OFF. It’s clearly been injured for a while, and his muscles on that leg are badly atrophied. If we hold off on surgery much longer, he won’t have enough muscle to ever recover.

I was distressed. I’ve never had a broken bone before so I know little about it, so I’m just beside myself. I’ve only had Dudley for a short time, but he means so much to me. We’ve bonded very tightly. Even the cat has begun to tolerate him. When we went to look for a dog, we were looking for the dog to protect our budding family, the dog who would be my kids’ childhood companion. We were looking for a forever dog. That means that we’re keeping him and we’re helping him, no matter the cost.

But even if he wasn’t my dog, I couldn’t help but be moved. Dudley’s only 1 year old. A 1 year old dog who is looking at surgery now or never running again. That’s horrible. Every dog deserves to run and fetch and do what dogs do. Even with this surgery the vet said he’ll likely never be able to jump. But if running is all I can give him, I want to give him that.

I posted a couple of long, rambling, distressed statuses on facebook just needing friends to comfort me and tell me he’ll be okay. What I didn’t expect was for three separate people, two of whom have never met Dudley, and one of whom has never met me, to suggest I start a fund raiser and say if I did, they’d donate.

Ever since we bought our first house earlier this year, I’ve been surprisingly not worried about money. We saved for the house and we were financially prepared for the change. We were financially prepared to adopt a new pet. But this surgery will be expensive, and in this nation where humans have trouble getting health insurance, there isn’t much help for a rescued dog. I know it’ll be okay, and I know money is just money. Still, it’s only sensible to be concerned about finances. It would never stop me from getting Dudley the care he needs, but it does scare me. It’s a leap of faith. And sure enough, by reaching out emotionally I was met with answers to financial trouble before I even asked. Heck, before I even had much time to really freak out!

So I thought I’d share the fund raiser here too. If you are able and want to help a rescue dog get his second chance at a quality life, click here to donate. Dudley has already shown himself to be a true spoonie, and I feel so profoundly understood by this creature who never looks like he’s hurting. Seeing him get better would be great not only for me, but for anyone who’s hurting and reading this blog. We need success stories. We also need more people to reach out to shelter animals and people who do adopt animals. All of this is a small but important step towards fighting puppy mills and the overpopulation of domestic animals. Also, unfortunately, we need to step up to clean up the uncaring mess that others have left. I don’t know how Dudley got hurt or how he ended up stray, but it’s clear he had a human family before us. He knows about human life and how to be a pet – he’s even house trained. And somehow he ended up hurt and alone.

My husband says I have a severe case of bleeding heart about all animals. Maybe that’s true. But I think that’s good. Animals are worth so much. They offer so much. They should be treated like the treasure they are. I will always treasure Dudley, and if you’ve ever read a post on this blog and it made you smile, know you can give that smile back to me tenfold – a hundredfold – if you decide to help us take care of Dudley.

Thank you for reading – even if you decide against helping or can’t help financially at this time, thank you for supporting me by reading and being there. And please, if you’re considering getting a pet of ANY kind, check your local shelter. They have some of the most amazing cats and dogs, plus just about any other animal you have your heart set on. My local shelter has everything from snakes to sugar gliders! Adopt – adopt – adopt!