Okay so we also have a lot more…the opposite of fun. But I really believe that being chronically ill just makes some celebrations more fun! And it’s not just illness. I think my favorite Christmases or New Years have always come after times of particular stress or depression. I’ve had my share of holidays that have totally sucked because of stress or depression, too. But this Halloween, for instance, happened to fall during a time when we couldn’t get approved for a mortgage loan and I felt like nothing in my life was working out or going right. Then all of a sudden it was Halloween, and there was candy and movies and friends, and it was like a cool, crisp breath of fresh air after being in the smoking section of a monkey house.

Sometimes, holidays are just what you need.

I hope that this New Years Eve is just what you need, whether you do the whole partying thing, or you stay home and play board games because you’re cool like me.

I’ve never been a huge fan of New Years, so I don’t have any WOW New Years stories, so instead I’ll be sharing a story about a way more awesome holiday – my birthday!

Go ahead and mark your calendars – my birthday is Feb. 16, and I like Ninja Turtles. You’ve got some time. Raphael is best turtle.

So around the time I started this blog, my chronic pain was being overshadowed (for once) by some serious dental problems. I missed my chronic pain. That’s how bad the tooth pain was. I didn’t want to eat or move, and I lost a ton of weight in a bad way. My eyes were sunken in and the side of my face was swelling to about the size of an orange.

Thanks to an insatiable sweet tooth, a teenhood of shoddy dental care and apathy, and all the vicodin I later had to take for chronic pain, my teeth were a mess. I had SO much work done that year. My dentist was in Dallas and I was about an hour away, which is how this reached emergency levels. Eventually, the swelling threatened to close up my throat, and I was brought in for emergency surgery. My surgeon said that even waiting a few hours would have probably put me in a hospital.

The surgery was a success, but I had a drain in my face for a few days. Of course, we didn’t know I’d need that going in to it. While I was coming off the anesthesia, I got to rediscover the horror of a FRIGGEN TUBE STICKING OUT OF MY FACE about ten times.

It was like being a gif. Just repeating the reaction over and over and over until the meds wore off and my brain could brain again.

Anyway, after that my teeth felt better but the gaping whole in my face was now causing pain and making me still not want to eat.

I bet you’re thinking this all still sounds like the opposite of fun. I told you, there’s a LOT more the-opposite-of-fun before you start having more fun than average. 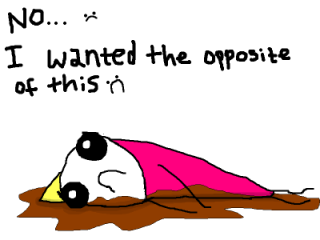 (I got a hyperbole and a half book for Christmas. Expect a lot more references.)

So I got my face tube taken out and was on the mend just in time for my birthday. I was still in college, so my friends were still scattered across the globe. That means I wasn’t planning on having a party or anything. We just kept it simple. First, we went to the mall and went to the Disney Store. I got to buy and trade Vinylmation. 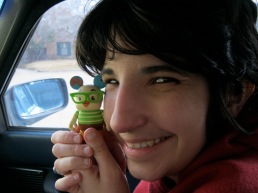 Then we went out to dinner with my family at a fondue place I’d wanted to go to for a long time. I found that now that my face didn’t hurt, I was actually really, really hungry all the time. This was a good place to put some meat on my bones. The food was amazing and bite-sized – which was good because I felt better but not 100% better. The cheese, meat, and chocolate were like mana from heaven

Everyone was really happy and seemed to just have a good time. They brought me out a special chocolate-dipped strawberry with a candle in it.

This all sounds pretty simple, right? Not really life-changing. But for some reason, it put me over the moon.

After being in pain for so long and staying in bed and not eating or talking to anyone, this family dinner and mall outing felt like coming back from the dead.

This will sound cheesy, but it’s actually how I felt:

When I went to blow out the candle, I was so happy that I couldn’t think of a thing to wish for. So I just wished that next year, I’d feel as loved and happy on my birthday as I did that day.

I don’t think I’ll ever forget that simple, perfect birthday.

I don’t have any big plans for tonight, but maybe it will have that same simple perfection. I feel like a zombie after a particularly stressful Christmas and – BIG NEWS – getting a contract on the house we want! We just had our inspection yesterday and are working on negotiating a few issues here and there. Hopefully in a few weeks we’ll officially be homeowners! There’s a lot to do, so tonight I’m just going to try and take it easy before the next big crazy whirlwind of life stuff.

Oh, here’s the Christmas video I did that I mentioned before. That’s me, my grandparents, and my sister in the freeze frame there. My husband is Santa! Came out pretty nice.

P.S. – so far I have 3 cards for Alex, and I think there are more on the way! So if you still want to write to him, just tell me and I’ll keep hoarding them! I’d like to give him as many letters as possible, I think it’s more fun that way. Don’t know what I’m talking about? Click here!