Sorry, this post has nothing to do with weddings, I just enjoy wordplay.

So I have had the honor of receiving two re-nominations for awards since my last post – Thanks to Joy’s Turn and My Fibrotastic Life! These are two blogs that I’ve only recently discovered myself, and you guys should check out these up-and-commers.

Jenny of My Fibrotastic Life nominated me for the WordPress Family Award. You can see my nominees to pass it on here.

Joy’s Turn honored me with the Liebster Award, and you can see my nominees for that here. But my favorite part of this award is that each nominator gets to write a set of questions to be answered by the nominees, so here’s my answers to her questions. They’re really good ones, I’m excited!

1.  If you could paint a picture of any scenery you’ve seen before, what would you paint? There was one time when my husband to be and I were on the top of a parking garage and we saw this light in the sky. It was amazing, like a cross between a comet and a firework. A friend said it might have been a will-o-the-wisp. I don’t really believe in that kind of thing, but not knowing what else to call it, I’ve always agreed. I’d love to be able to paint that strange thing we both saw.

It looked nothing like this,
but I love me some brave.

2.  If you had to work on only one project for the next year, what would it be? I’d LOVE to just work on my current script. I love screenwriting, and if there was a way to do it full time, I would.

3.  When you have 30 minutes of free-time, how do you pass the time? You’re opening a can of worm my friend. I have a very complex, fair, and efficient system that determines what I do with my spare time. The result is an almost perfect balance of leisure activity and making headway on goals and projects. Someday I’ll write a blog post detailing my insane system but I’m not sure I’m ready to release that crazy just yet. 😉

4.  What songs are included on the soundtrack to your life? This reminds me of one of my favorite outdated internet memes! Put your iPod on shuffle, and fill in each question with a song (no cheating!). I love this meme. I think I’ll do it now!

Waking Up: Don’t Fear the Morning – Jon Cook (a friend of mine who is an AWESOME singer/songwriter – check him out here!)

First Day of School: Seeing is Believing – The Polar Express

Prom: The Speed Test – Thoroughly Modern Millie (this makes no sense, yet somehow does make sense…)

Main Theme: How Can I Refuse – Barbie’s The Princess and the Pauper (Don’t judge me, but I’d be very happy to have that be the theme song of my life.)

Mental Breakdown: The Wells Fargo Wagon – The Music Man (this song sort of does capture my rare form of insanity)

Driving: I’ve Got My Eye on You – Pirates of the Caribbean

Getting Back Together: Anything Can Happen if you Let it – Mary Poppins (heeeey we played that at our wedding!)

Birth of Child: To The Pirate’s Cave – Pirates of the Caribbean (well….if I’m the pirate….sorry that’s gross I’ll stop now.)

Death Scene: Swanee River – The Royal Street Band (if this means I die in Frontierland in Disneyland, I’m okay with this.) ((UNLESS IT’S ON SPLASH MOUNTAIN))

End Credits: Children and Art – Sunday in the Park with George (you’ll be crying during these end credits. I agree, the most important things you can leave behind when the story of your life is over are children and art….children and art….)

5. What was the last movie, TV show or book that made you cry or tear up? Ok. I’ve been re-watching Friends with my hubby, and we just finished Season 8, where the season finale is Rachel having her baby. And my hormones have lately decided I like, NEED a baby. And watching that episode had me sobbing, just sobbing uncontrollably. I’ve written a bit on here about how for me personally, pregnancy is likely to get rid of a lot of my endometriosis symptoms. But not only that, I’ve always wanted to be a stay at home (and write!) mom and I’m so close, yet so far to getting to that place. AND my cousin just announced that she’s pregnant. Omg I’m going to cry right now.

6.  What do you miss most about being a kid? How sad would it be if I said having energy and not feeling sick all the time?

7.  What does your perfect day look like? I’m traveling for sure, maybe in Paris or Tokyo. Or on a cruise ship. I’m doing exciting things I’ve never done before, eating new food and not getting sick on it, and I’m full of energy. And of course, my husband is with me. 🙂

8.  What do you think is the one thing that should be taught in school that isn’t already? Finances! I never took a financial class in school. WHAT THE CRAP??

9.  What do you want to be when you grow up? A screenwriter and mommy.

10.  What is one of your favorite quotes? “Life’s like a movie: write your own ending. Keep believing, keep pretending.” ~ Kermit the Frog

Thanks again to all of you for all the support. But I’ve recently had something new happen here on my blog.

I’m not naive enough to believe I’ve never had someone unsubscribe before. Heck, I’ve had to unsubscribe to plenty of blogs. There just aren’t enough hours in the day to keep up a subscription if the topic wanders from your initial interest. I’ve also made the executive decision to unsubscribe from blogs that update too much – I can’t read one person’s blog multiple times every day, for instance. And I also follow blogs through facebook, twitter, and sometimes I’m just friends with a person, and we interact so much that I don’t need to subscribe because I already know I’ll visit regularly.

There has also been plenty of times that I’m loving a blog when all of a sudden one post ruins the whole thing. I could make up ridiculous examples but I don’t even need to. Here’s some real life reasons I’ve stopped following blogs:

I dunno. It’s one thing to see weird stuff like that online, but when it’s attached to a blog you’ve been reading for a while by someone who you start to feel like you know…. *shudder.* Sometimes you just have to back away slowly…

But I’ve never left a novel of a comment explaining how I used to like this blog until it went crazy and called for kitten genocide or something. I just click unfollow. And it’s not even spiteful, it’s like walking into the wrong classroom by mistake and then leaving. You don’t stand there and berate everyone for being, well….not what you expected. Sometimes you and a blog just don’t belong together and that’s okay. I’ve read tons of blogs I liked but didn’t subscribe to – I don’t leave comments talking about how I like it but I’m not in a place where I want to read it every day.

And sure, sometimes you need to disagree with something being said. Like kitten genocide. I’d probably need to leave a comment advising they seek help because the mass slaughter of baby animals is generally frowned upon even on the internet. But really, even then I don’t say “WHOA I used to like this blog but now I’m leaving forever!”

Maybe it’s just because my blog is relatively small and I haven’t had much negative attention, but I was pretty surprised when I got such a comment. And what’s really baffling is that it wasn’t even a person disagreeing with a post! They were mad that I approved a comment of a differing view than what I wrote about. The comment was written in good english and well thought out, even if I didn’t agree with the content, and I saw no reason to censor it. Someone else’s views made a reader unfollow me. WAT?

So for future reference, I guess I gotta get this disclaimer up: The comments in no way reflect the views and values of Do I Look Sick. They’re just…comments. Anyone can write one. You can write one. I’ll only censor spam, heavy use of offensive language, “flames,” and personal attacks. Otherwise it’s an open forum down there. If you’re bothered by this, I suggest you stay off YouTube.

I have deleted some pretty nasty comments, though, so know that I don’t just let anything fly.

I’ve also had a commenter say they like my writing but refuse to follow my blog because it is white text on a black background. So I have another public service announcement: If you subscribe to receive emails when I update, my blog posts go straight to your inbox in full, where you have control over all colors and fonts.

Now that Old and New are out of the way, here’s some Blue:

Yes, I’m a natural blue. This Halloween I invested in an electric blue full body rain suit and had a blast. Sorry I’ve been MIA lately – I have the post-Halloween illness, why can’t I stop eating candy? My stomach hurts all the time but holy crap is that a kit kat bar?! GIVEITHERE. 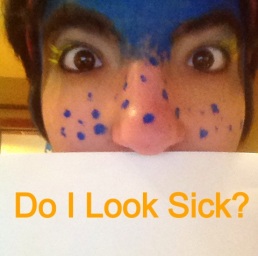