or: How Living with a Rifle Across My Back and War Paint on my Face Gave Me the False Notion that I Can Do Anything.

I’ve written before about my time in the RHS Colorguard, and I’ll likely write about it many more times. It may sound pathetic, but I identified myself with colorguard the way many people identify themselves by religion, race, and even illness. From age 15 to 18, everyone who knew me or even knew of me knew me as Captain Rachel, The Colorguard Girl. 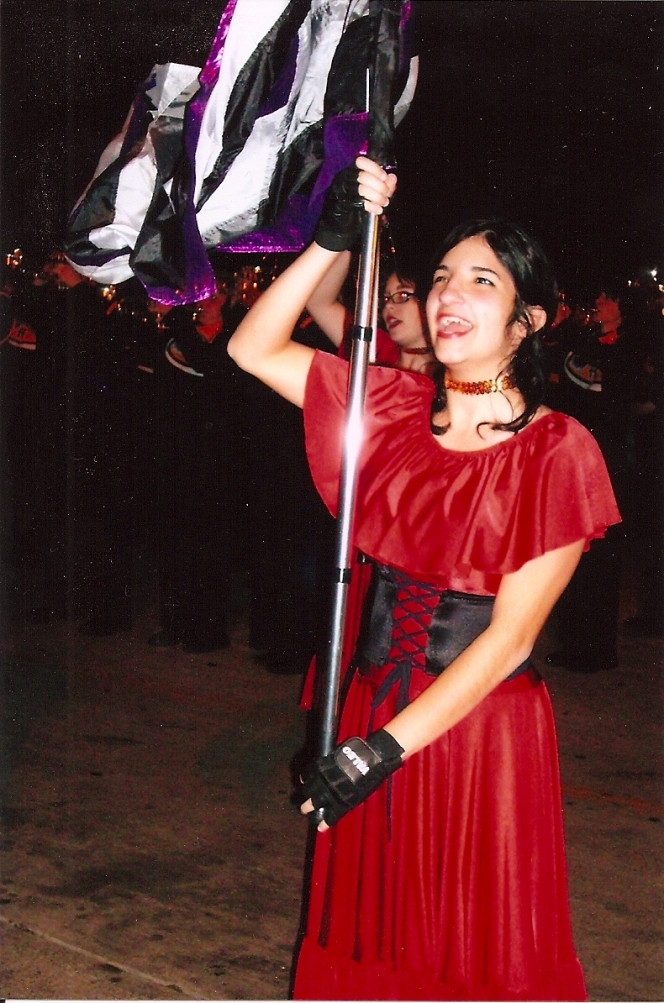 A brief history, for those of you who haven’t read the post linked above: I joined up with the guard in the summer before my first year of high school, but I joined late. I was the very worst person in the guard, but that planted a sort of defiance in me. After literally practicing day and night, the school year started with me as a top performer. The year after that I made history by becoming the youngest colorguard captain in RHS history, outranking seniors with more years of experience than me.

I was tough as nails. When our colorguard instructor began to flake out on us as he pursued a promotion to another school, I took up the slack and wrote half the show myself. I had 25 girls, 2 boys, and no adults to help me – and my team ran like clockwork. I wasn’t afraid to make my best friends do push ups. For the first time, RHS had a serious colorguard. I will never forget the day in rehearsal that the band director stopped the whole show to yell at the band because “The guard’s putting on a beautiful show and the music is not good enough to accompany them!”

Even after graduating, in some cases years after graduating, I would receive emails and notes from the girls I led saying that I had had such a huge impact on their high school years, and thanking me for being a good captain. I’m not saying all this to brag – if anything it’s the opposite. My whole identity, everything I thought of myself was completely based on what other’s thought of me. I was never a leader before this, never popular, never considered tough or brave – my girls made me a leader. They loved me, and they thought I was brave and tough. So I was brave and tough, and I loved myself. That’s all probably unhealthy but not uncommon in the lives of high school girls.

This was before I was sick, and this was when I developed the habit of not taking care of myself.

My dad would drive me to school a lot since I was the only one of his daughters who needed to be at school by 5:30 AM. I’d grab my backpack and swing my rifle over my shoulder as I hopped out of his car, and he’d smile and say he loves to drop off his girl with a gun on her back. He thought I was a badass, and so did I.

So one summer, we spent a week down at a friend’s lake house. My family is big in to waterskiing. I’ve been skiing my whole life. I’d only just learned how to ski slalom the summer before, and let’s just say I didn’t have my sea legs yet. Still, I jumped in with one ski raring to go because I was a badass. The boat started up and I couldn’t get up. I held on and pulled but the ski was buried in the water – there was no way I’d be standing up on this run. I should have let go and tried again, but being a badass I hung on and fought physics until pain shot through my arm and the rope snapped out of my hands. The boat came around and got me, and I tried and tried to get up, but my wrist just wasn’t obeying me any more. When we got home, I found myself shackled in an embarrassing wrist brace.

Well okay, it wasn’t embarrassing really. I quite liked how it looked. It looked like I WAS A BADASS! And that was really my only goal in life. But when I got to band camp, it did become embarrassing. The stupid thing wouldn’t let me twist my wrist, and my flagwork looked atrocious! So I’m standing in front of my small army trying to teach a routine and I look like some kind of rookie – no sir. So I ripped that thing right off and threw it aside and did beautiful, technically perfect flagwork. But my girls were looking at that brace. A few even ventured to say they didn’t think it was a good idea for me to do that. I loved their concern – it made me feel cared for – but I didn’t need it. I was their fearless leader, and I did not need a wrist brace.

The only permanent damage that was done was that I learned that I truly am invincible, and while I don’t mind people worrying about me, I do not need help. I am a superhero. I am strong and fearless. I can do anything! That’s what everyone has always told me! And for a while there, it was true.

Everyone still tells me I can do anything. I have very few friends today who didn’t grow up with Captain Rachel. Even my husband started dating me when I was that invincible being. Now, it seems like the smallest thing can defeat me. I now rely on much more than a wrist brace – I take pills every day, and when I don’t I am worthless. My new 50 hour work week is taking a heavy toll on my body and mind, but whenever I feebly try to tell someone about it, they smile those same awful smiles and say “You can do this! You can do anything!” I still look like Super Rachel. I look like I could do anything.

But I really wish someone would say it’s okay if I can’t do everything.

I called myself the Die Hard Guard Girl. I am glad that that girl is hard to kill. I have that fire inside me, and I treasure that. But I am not her any more. I’m not invincible, and I hate that.