A couple of months ago, if you asked me what the worst job an invisibly ill person can have, I’d have told you “Party City Halloween Help.” I’ve shared that story on here already, along with some great advice on handling being ill and being employed. That’s all fine and well, but there are some people who are just jerks. There are some employers who are simply unwilling to understand or be accommodating. There are some bosses who are only interested in running a business, not in making the world a better place. I have never run in to such a person….until now.

Spoiler alert: what’s really crazy about this story is that this wasn’t my boss – it was my husband’s boss. Yes, that’s right. My husband was fired for having a sick wife.

So, what’s the worst place to work if you have an invisible illness? I bet you wouldn’t have guessed the church.

Hubby and I love our church. We visited a lot of churches when we moved to Denton, and it took us almost a year to find a place that was a good fit for us. In that time, we lost our car and were given a new (used) one by my parents as an early Christmas present. The first place we drove was our church. We adore the newlywed group we’re involved in, and we’ve made so many friends and lasting memories. We even got to be in the Christmas pageant!

So don’t get me wrong here – I love our church. That’s why everything seemed so perfect when we found out about the opening with the kids ministry. They put out an ad for volunteers to come act in the kids worship service they do every sunday. Since Hubby was an out of work actor, we answered the ad. When we met with Chris, the kids minister, he happened to mention that there was an opening for a paid intern position with the church. Hubby had been jobless for months and months, and we all agreed that this was too perfect to be coincidence. Everything was falling in to place.

It turned out that the internship position was more than perfect for Hubby. He was an actor, and every week they put on a full scale theatrical production for the kids. Here’s a promotion video I made (free of charge) for a section they did called “Journey Below the Earth.”

Pretty neat, huh? They built a whole new set with a whole new theme every six weeks or so. Hubby was happy as can be, the kiddos LOVED him, and he was getting to do the things he loved best: theater, and serving God. For a while there, it was totally perfect. Then summer came.

See, in the summer, everything changes. There’s VBS, camp, events, all kinds of things. Hubby would be put on a salary instead of his previous hourly payment. This means we was being paid exponentially less money to do exponentially more work. He was working about 40 hours a week and making as much as I make at my 20 hours a week job. I won’t go in to all the details of how difficult that was – obviously, that would be rough on anyone. But it was especially hard on us. Towards the very beginning of this big change, I needed to have surgery. It was last minute, and it had to happen. 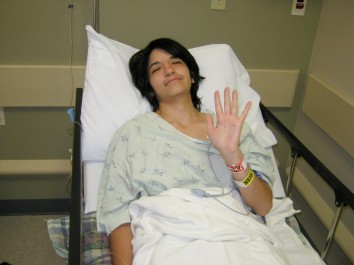 Hubby was able to get Tues – Saturday off for me. Chris wanted him to still come in Wednesday and Saturday, though, so… not really. After some negotiation, Hubby was able to take Wednesday off and just go Saturday. We stayed in Dallas with my family, because that’s where I was having surgery and I didn’t think I’d be up to the long car trip from Dallas to Denton.

Now, I have had this surgery before, but this time went much smoother than last time. I didn’t have to stay at the hospital all day, I didn’t throw up any of my medicine, and I was even eating and walking all by myself! I posted a facebook status telling my friends and family that I was doing just fine, and I was pleased to announce that it went much better than last time. After I posted that (this was on Wednesday, the day after my surgery), Hubby got a text from Chris asking if Hubby would be coming in that night after all, since I was doing well. Nice. Tactful.

Chris is so lucky he’s never had to undergo surgery like this, or watch a family member sustain this kind of medical event. Surely if he had, he’d know that just because I’m “doing well” does NOT mean I am well. Healing and not being sick are two different things.

Chris gave Hubby a really hard time about taking off work, being sure to remind him how “gracious” he was being to him, and telling him that this is just not how things are done. Leading up to the surgery, I hardly saw Hubby at all. We were like ships passing in the night. He could (sometimes) come have a quick lunch with me, then we’d eat a late dinner and get to bed late. Every morning, I’d get up extra early so I could have breakfast with him, and I’d arrive at work early because we had to share a car. Never mind that I was incredibly ill, and that my boss wouldn’t even arrive until two hours later, leaving me alone and grasping for jobs to do without him. Our entire lives changed for this job, and it was extremely rough on me. Staying up extra late and waking up extra early was wearing down my already worn out chronic illness body, and if I did sleep in I had to take the bus, which entailed a very long walk from the apartment to the bus, and an even longer uphill trek to work from the bus. Either way, I arrived at work exhausted and barely holding on to consciousness each day. These were sacrifices I made for my husband and his job. But they went completely unnoticed by Chris.

When Hubby would have to miss work, Chris would really get on him about it, even going so far as to attack me, personally. He’d tell hubby that “it sounds like Rachel doesn’t care very much about your job.” because I needed a caretaker more than a breadwinner on some days. And here’s the thing: sure, maybe my husband’s employer wouldn’t think about me having to change my whole lifestyle to accommodate his schedule, but he DID know I cared about Hubby’s job.

Remember that video up there? Yeah. I filmed and edited that thing with my own equipment on my own time for nothing. And that’s not all. I actually made a 20 minute video for them to play in the hallways on Sunday morning, AND I photographed a few of their events, edited the photos, and posted them online. This was all using my own resources, and I was paid nothing to do it. I offered to. BECAUSE I CARE. And here’s the kicker – most of the videos and pictures I provided were never used for anything. Chris begged me to do these things, but once he had them he just let them sit and gather dust.

And I’m the selfish one.

Another issue with this job is that Hubby never got to go to church anymore. I think this is a good time to say that I’d like to leave religious debates out of this discussion, and I’d really like to avoid any spiritual warfare in the comment section. Please just respect that my faith is important to me, and the time my husband and I spend in church together is very important to me. I was now attending church alone, and I’m not a very social person so I didn’t talk much to anyone. I just stood in the back. Alone. Sundays turned into a myriad of disappointments and arguments. We had to get to church way before anyone else, and originally Hubby was supposed to be able to attend church every once in awhile. When he couldn’t, (which was always), we’d fight and I’d cry and go to church alone. I did that a couple of times (including easter sunday – both normal AND sunrise services), then started trying to go to the kids service and watch Hubby perform. That was fun at first, except that I’d get drafted to help out and/or totally ignored by hubby. I realize that’s not his fault, but its still hurtful. Eventually I stopped going altogether. I toyed with the idea of finding some other church…or something…but all in all, I found it painfully hypocritical that to work at this church, you must not attend services, never see your family, yet maintain a healthy spiritual life.

I feel so, so sorry for Chris’s family. Hubby says the same. He must never see them. We know he never goes to church with them. How can he be the spiritual leader of that household and be so absent?

It really doesn’t have to be this way! Hubby and I have come up with multiple solutions to this problem. Rescheduling the shows or reconfiguring the jobs could make it to where everyone who helps out or works for the kids ministry could also attend church once in awhile and spend time with their families. Chris is totally unwilling to listen or change anything. He’s convinced he’s got everything right.

I guess the thing that puzzles me most of all is how Chris could wax poetic on how God sent Hubby to him, and it was destiny that he work for the ministry, yet fire him. If he really believed God willed my husband to work for him, how could he turn him away without accessing the situation and trying to find a solution?

Oh, right. I’m sure you’re all wondering how my husband was eventually fired.

After my surgery, I came down with a fever and other flu-like symptoms. This is a very serious situation – I would need to be monitored closely to make sure I healed okay, and it wasn’t the sign of some infection. The sickness hit me hard. I couldn’t speak except in small squeaks, I hurt all over, I was exhausted all the time. So hubby let Chris know that he’d need to take off tomorrow (Sunday) to take care of me. Chris fired him over the phone.

So I took Monday off, and Tuesday I was back in the office, sick as a dog. But I couldn’t take off work, right? We were very suddenly financially unstable. I had to work, sick or not. Luckily for me, I have a human being for a boss who cares enough about me to say “Maybe you should go home early, get some rest.”

By the way, I don’t work at a church, I work at a production company at my university. The fast and furious world of film – where people are nicer than priests, apparently. 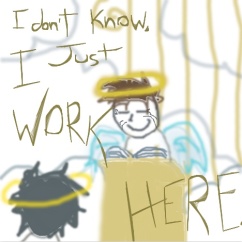